Shillong, October 28, 2018 : Naorem Mahesh Singh did the star turn for hosts Shillong Lajong as an electrifying first North East Derby of the 12thHero I-League season, saw the home team overcome 10thedition champions Aizawl FC by the odd goal in three. At Shillong’s JLN stadium and in front of a near full-house of adoring and noisy fans, Mahesh scored two brilliant goals in either half to clinch full three points for his side. Aizawl’s Liberian striker Ansumanah Kromah got one back for the visitors but it was not enough. The young Lajong side who overcame hurdles like not fielding any foreigners this season and playing as many as nine uner-22 players in the starting eleven ensured that the fans had enough to rejoice once the full time whistle happened.

Allison Kharsentiew, the Lajong gaffer started with captain Samuel Lalmuanpuia who was expected to lead attacks from the midfield, with exciting wingers Naorem Mahesh Singh and Samuel Lyngdoh for company. Rakesh Pradhan and Kenstar Kharshong were at the heart of deep defense with Aibanbha Dohling and Novin given the overlap roles. Neithovilie Chalieu started in the Lajong goal. 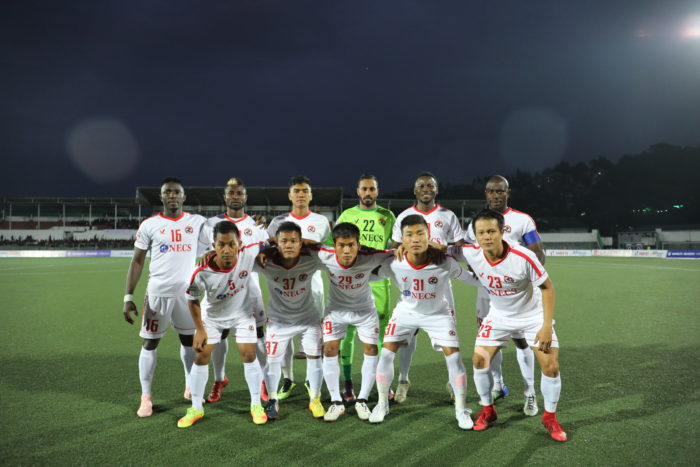 Aizawl coach Gift Raikhan had a more settled and predictable look to his starting eleven, with Ivorian Dodoz and Liberian Ansumanah Kromah up in attack and captain Alfred Jaryan, also of Liberian descent, leading midfield. Nigerian Kareem Nurain was leading the Aizawl back line while Gurpreet Singh was in goal.

Expectedly, given the fitness levels and youth in both sides, the game began on a high tempo and continued as such till the very end. Creditable, particularly from a Shillong perspective given the age of the side.

The first chance fell to the visitors as early as in the 5thminute, when Kromah intercepted a defensive blooper deep inside the Lajong half, but failed to capitalise on it. From the resultant corner, the ball swooped down favourably for Aizawl defender Valpuia who was unmarked, but his header was off-target.

In the 15thminute Aibanbha Dohling brought down Kromah just outside the box in a dangerous position and earned the game’s first booking from referee Tanmoy Dhar.

Then the talented right winger Mahesh Singh, who had an excellent first half, turned the game on its head with a sensational strike in the 20thminute that elated the home fans who were vociferous in their support throughout the game. It was Novin Gurung who latched on to a long ball from the Lajong defense outside the Aizawl box and passed to Mahesh on the right flank. Mahesh side-stepped one defender and cut in, before unleashing a scorching curler of a left footer that beat Aizawl keeper Gurpreet all ends up and settled into the top right corner of the Aizawl goal.

Another left footed long ranger by Mahesh in the 27thminute was collected comfortably by Gurpreet as even though Aizawl was beginning to ascertain more control over the game, the hosts went into the lemon break, with their lead secure.

After the break, Jaryan missed a sitter in the 50thminute, when a cross from the left wing found him unmarked in the middle of the top of the goalkeeper’s area, but his volley missed the mark.

In the 51stminute, after a wonderful interchange of passes inside the Aizawl half, Lajong defender Rakesh Pradhan received a ball on the overlap on the left flank. His wonderful cross took out the Aizawl defense completely. Mahesh was following everything including the ball and met the ball with perfect timing to lob it over Gurpreet in the Aizawl goal to double the lead.

Aizawl finally got one back when a wonderful 1-2 between Paul and Remsanga outside the Shillong box, released Kromah in the clear. He side-stepped the goal keeper and was about to pull the trigger into an empty goal when Neitho clipped his feet to bring him down and referee Dhar had no hesitation pointing to the spot. Kromah converted calmly.

Then substitute Isak had a golden chance to equalise in the 73rdminute, but his shot from the right side and from inside the box went wide with just the goalkeeper to beat. Aizawl kept pressing and even in the seconds before the final whistle the visitors had two clear chances at goal but it was not their day to be.

For Shillong, Aiban had a brilliant game in defense and was responsible in thwarting many a threat. Hero of the Match Mahesh Singh got a deserving break in the 82ndminute being replaced by Sheen Sohktung and he went out to warm applause.

After five games, Shillong join Quess East Bengal and table toppers Chennai City (on goal difference) with three points to show. Four teams, Mohun Bagan, Gokulam Kerala, Minerva and Chruchill Brothers have a point each from their drawn games while Neroca, Aizawl and Indian Arrows have lost their opening games.