Guwahati, 25 October 2018: NorthEast United climbed back to the top of the Hero Indian Super League after an eventful 1-1 draw against Jamshedpur FC at the India Gandhi Athletic stadium here today.

Bartholomew Obgeche (20’) gave the hosts early lead before Farukh Chaudhary cancelled out his strike in the 49th minute.

It was the Highlanders who created the first real opening in the game after Federico Gallego surged down the right flank. The Uruguayan squared the ball back for Ogbeche from the by-line but the Nigerian’s rushed shot was some way off target.

The Nigerian would not be denied his goal minutes later after an error from Mario Arques. The Jamshedpur midfielder was dispossessed off the ball in his own box by Gallego before Ogbeche showed a brilliant first touch and then toe-poked the ball past a hapless Subrata Paul. 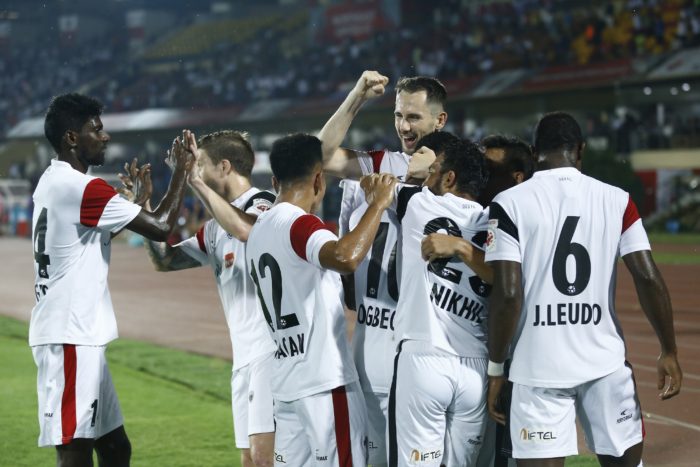 The visitors almost hit back immediately after Calvo’s intended cross from the left-flank deceived Pawan Kumar before bouncing off the crossbar. At the other end, Ogbeche continued to look dangerous with his quick feet and physical prowess.

Ferrando’s men began exerting a greater control on the ball as the half progressed but always seemed to run out of ideas in the final third. 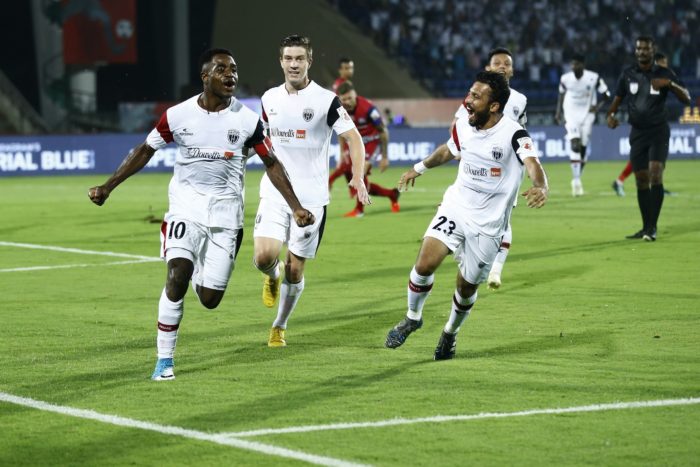 Just seconds after Redeem Tlang had forced Subrata into an excellent save, the hosts shot themselves in the foot with Komorski picking up a red card at the stroke of half-time. The Croatian defender swung his elbow wildly towards Pablo Morgado’s face and the referee had no hesitation in giving him the marching orders after consulting with the linesman.

It took just four minutes for the visitors to make their man advantage count after Reagan Singh failed to clear the ball. Morgado stole the ball before delivering a delightful cross from the left to which Farukh applied a sumptuous first-time finish with his left foot, leaving Pawan Kumar no chance.

With the game meandering towards the 70th minute mark, Tim Cahill was finally brought on as Ferrando went for the kill. The visitors put bodies forward in numbers with balls being launched into the box constantly but the cutting edge was missing.

Soosairaj came closest to taking the lead for the visitors but the 10 men of NorthEast hung on dearly for a precious draw.

After 'Shame' In Goa, Mumbai Look To Start Afresh