DHAKA, 15th September 2018 : The Indian National Team went down fighting 1-2 against Maldives in the Final of the SAFF Suzuki Cup 2018 at the Bangabandhu National Stadium in Dhaka today (September 15, 2018). 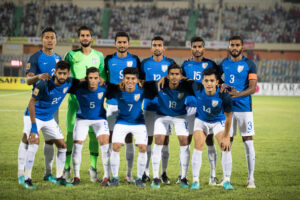 Maldives scored a goal-a-piece in either half, and the only Indian goal came in the added extra time of the second handed courtesy of a Sumeet Passi strike as the Isanders went on to win the SAFF Trophy.

The Indians however, started on a positive note but a couple of brilliantly executed counter attacks and a resilient defensive display from the Islanders shattered the defending champions’ dream of clinching their record eighth SAFF title.

India were the brighter side at the starting of the match as they continued to push Maldives to their limit until they scored against the run of the play in the 19th minute. On a quick counter-attacking move, Naiz Hussain played a deft delivery to Ibrahim Hussain only to see him gleefully score the opener before the 20-minute mark. Meanwhile, this was the first instance in the SAFF Suzuki Cup 2018 where India were trailing against their opponents.

India, in their pursuit of the equaliser, came close quite a few times but the attackers were missing the finesse in front of the opposition goal. On the half-hour mark, Ashique delivered a low cross from the left flank directed to Farukh who lost his balance to lose the opportunity. On the resultant corner, Subhasish jumped to head it home but the Maldivian goalie Mohamed Faisal fisted the danger away.

One minute later, Manvir Singh, who happened to be the reigning highest scorer of SAFF Suzuki Cup 2018, latched on another attack but it rippled the side-netting. India headed to the changing room trailing by the solitary goal.

Maldives doubled their lead in the 68th minute only to add a pinch of salt to India’s wounds. On another quick counter-attacking move, Hamzath Mohamed outran the Indian defence line to glide it on to an onrushing Ali Fasir who poked it home to send the Maldives bench into a rupture.

Subhasish got another tantalisingly appealing chance to breach the Maldivian defense from a well-taken corner by Hitesh in the 79th minute. He was left completely unmarked and a tap-in could have done the trick for the boys in Blue but the skipper mistimed it to see the ball go out of bounce.

Sumeet Passi sprung some life into the game having scored a goal for India in the added time but it was too late to deny the inevitable. On a cross from the right wing by Nikhil, Sumeet tucked it in to breach the sturdy Maldivian defense finally. The Maldivian goalie came out with another couple of terrific saves to deny the Indians to clinch their second SAFF Championship trophy.