India Girls Ready To Showcase Dominance In SAFF U-18 Championship

NEW DELHI, SEPTEMBER 26th, 2018 : These are busy days for the India U-18 women’s national team who are set to participate in the SAFF U-18 Women’s Championship, that kicks off on September 28, 2018. Armed with a new coach in the form of Alex Ambrose, the U-18 girls are all set for a new challenge in Bhutan.

The team that has recently been assembled, had a rigorous preparatory training camp at the National Institute of Sports (NIS) in Patiala, and are set to take on the best in South Asia, come Friday.

“We had a tough preparation for the SAFF U-18 Women’s Championship, but it was good for the girls. We have got our players into the best shape possible, ahead of the tournament,” said coach Ambrose from the Indira Gandhi International Airport, in New Delhi, ahead of the team’s departure for Thimphu. 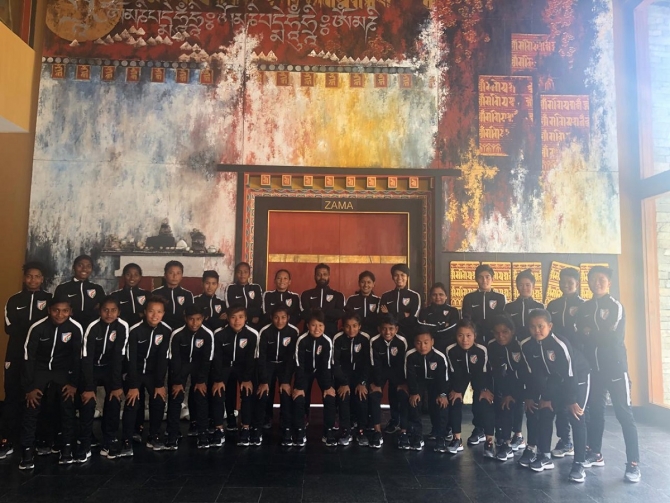 Jabamani Tudu, who is one of the key players in the team, and has also represented India on the international level, believes that the young eves are the best team in their age group in South Asia at the moment, and will look to dominate the opposition from the very first day.

“We had some really good practice sessions in Patiala. We’ve put in our hearts and souls into these sessions, and we hope that the results will show on the pitch,” the midfield general said. “We believe that we are the best team in the SAFF Championships, so we hope to get some good results.”

However, the SAFF Championship is set to serve as a stepping stone for the likes of Jabamani, as coach Ambrose believes that this tournament will help him and the girls build a better team chemistry ahead of the crucial AFC U-19 Championship next month in Thailand.

“The SAFF Championship is a great opportunity to gauge our players, and figure out the team combinations ahead of the AFC U-19 Championship Qualifiers next month,” said Ambrose. “It’s all about getting match experience. To add to that, these are international matches, so they are getting a lot more experience.”