India Down Sri Lanka To Begin SAFF Campaign In Style

India Down Sri Lanka To Begin SAFF Campaign In Style 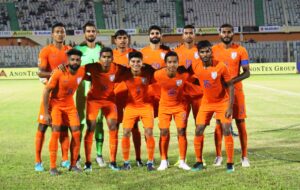 DHAKA, 5th September 2018: A dominant India began their campaign for the SAFF Suzuki Cup in style when they made short of Sri Lanka 2-0 in their opening fixture at the Bangabandhu Stadium here on Wednesday (September 5, 2018)

A goal each from Ashique Kuruniyan (35th) and Lalianzuala Chhangte (47th) in each half settled the issue for the defending champions.

India started the game on a high tempo and Ashique showed his intention within two minutes of the match when he latched the first attack from the left flank.

India, fielding the youngest team in the competition, barged on numerous attacks on the rival citadel but the Islanders kept them away from opening the scoring until the 36th minute when Ashique Kuruniyan sped past his marker and slotted it home past a diving keeper for his first International goal.

Almost immediately after, India came close to doubling the lead but Chhangte’s narrow miss, and a number of acrobatic saves by the Sri Lankan goalie kept the scoresheet unchanged.

After the breather, India took less than 120 seconds to score the second. Chhangte’s deep cross from the left wing was misread by the Sri Lankan goalie and it handed India a 2-0 lead.

Chhangte, by that time, had changed flanks and looked more effective down the left, the Islanders having a torrid time to keep him in check.

Nikhil Poojary, who had a season-long injury lay-off was introduced after the hour-mark and tried his luck off a corner off a Thapa corner but it sailed over the crossbar.

Farukh Chowdhury and substitute Manvir Singh also had their chances but were unable to cash in despite staying in advantageous positions. First, Farukh blasted into the crossbar in the 75th minute, and off the rebound, Manvir missed to connect it properly to find the third goal.

Courtesy the victory, India stay on top of Group B and they next take on Maldives in their next match on September 9, 2018.

Constantine ‘Happy With Result But Not With Performance’