New Delhi, 16th September 2018– The ‘SBL Road to the Ring’ contender’s semi-finals for the second edition of the Super Boxing League concluded at the properties own state-of the art facility in the capital city today. A total of 47 pugilists (41 men and 6 women) from across eight states were seen in action fighting for a spot in the ‘SBL Road to the Ring’ contenders Final due to be held later this year in the Delhi. 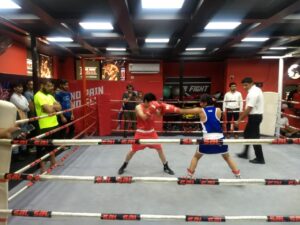 The SBL Road to the Ring contender’s semi-finals saw Punjab boxers stamp their authority walking away with five out the 12 spots at offer. Following Punjab closely were Haryana boxers who booked themselves for the Contenders final in four categories while Delhi managed for two spots and Kerala with just one. The competition included fights in five weight categories for men & one for women, post weigh-ins at the beginning of the trials.

The boxers were evaluated on the basis of their aggressiveness, ring control, fitness, technique, footwork and boxer’s chin (ability to take a hit) over the bout that consisted of three rounds of three minutes each.

Gaurav Pawar who stunned everyone by his knockouts says, “there were some good boxers out their today, but I was better of them all. Winning my fights via knockouts and impressing the judges is what I had aimed for. I hope to continue with performance and win the SBL title”.

Kirti who emerged as one of the best female boxers in the semi-finals said, “it was a great opportunity that I had got, so I gave my 100 percent. The judges really liked the way I boxed today, and I hope to continue this & improve even more by continuing my hard work”.

The winners from the semi-final round of ‘SBL Road to the Ring’ contender’s round will receive training under International and National coaches and under the watchful eyes of SBL, to become full-fledged professional boxers and will finally compete against each other in the ‘SBL Road to the Ring’ final which will take place later this year.