Gujarat Fortunegiants Register A Super Comeback Win Over U Mumba

Gujarat Fortunegiants produced a terrific performance to beat U Mumba 39-35 in a thrilling encounter of Vivo Pro Kabaddi Season 6. Gujarat Fortunegiants were trailing for most of the match but came to life in the last 10 minutes of the match to win the top of the table clash in Zone A. Prapanjan got a super 10 for Gujarat and Parvesh Bhainswal was a rock at the back as he got yet another high five. Siddharth Desai got 13 points for U Mumba but his effort went in vain.

U Mumba remain top of the table in Zone A with 57 points from 15 games but Gujarat are catching up and remain second with 53 points from 13 games.

Parvesh Bhainswal It was a close start to the match as both teams’ raiders got into the act to score points. After five minutes both teams were level at 5-5. Siddharth Desai for U Mumba and Prapanjan for Gujarat Fortunegiants got a couple of raid points. U Mumba got a sizeable lead of five points as they inflicted an all out in the 7th minute to lead 11-7. 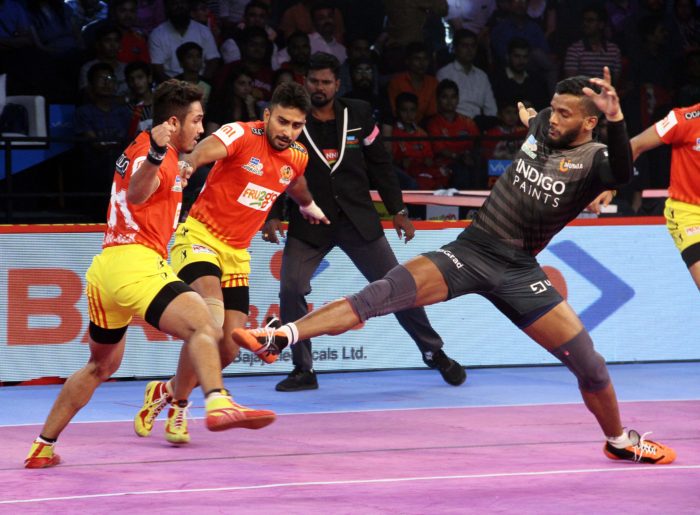 In the 14th minute Parvesh Bhainswal helped Gujarat force a super tacklea as they trailed  12-20. Anotehr super tackle before the end of the half meant that Gujarat went into the break trailing 16-21.

Gujarat Fortunegiants kept on chipping at U Mumba’s lead at regulr intervals with Prapanjan and Bhainswal handling raid and tackle points. U Mumba also forced a super tackle in the 26th minute to lead 26-19.

An all out was inflicted by Gujarat in the 30th minute as they trailed 26-28. The last five minutes of the match swung like a pendulum in both teams’ favour. Gujarat Fortuneigants defence put in strong tackles as Gujarat led 33-32 with less than three minutes to go.

U Mumba were reduced to just two men with two minutes to go. Mahendra Rajput got a raid point in the 37th minute as Gujarat led 34-32 and were on the verge of inflicting an all out. An all out was inflicted in the 37th minute to lead 37-32.

Prapanjan made a brilliant two-point raid in the 40th minute to seal U Mumba’s fate as Gujarat Fortunegiants won39-35.