Suzhou, 13th OCTOBER 2018: In what was India’s first-ever official International Friendly on Chinese soil, a gritty India played a 0-0 draw against PR China at the Suzhou Olympic Sports Centre Stadium on Saturday (October 13, 2018).

The Blue Tigers, ranked 97 in the world in FIFA rankings held firm against their 76th-ranked opponents, defending with strength and heart. They even created opportunities at regular intervals, including a last-minute one, which if converted by substitute Farukh Chowdhury would have India’s first win over China in 18 matches. 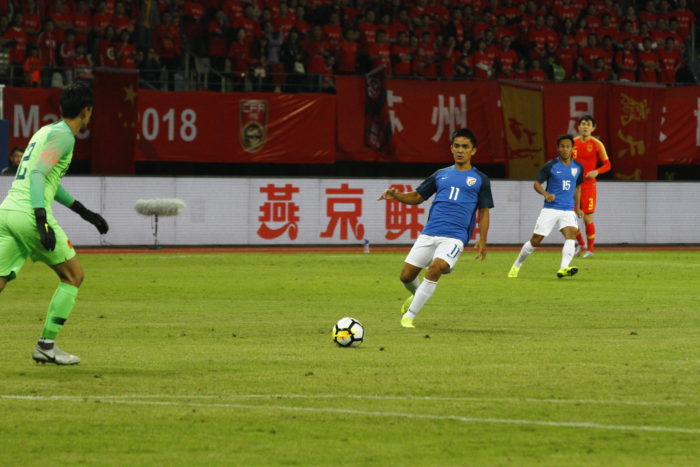 The match began as expected with the hosts piling on the early pressure. The first chance came in the 7th minute in the form of a cross from the left side by the Chinese winger which forced Indian captain Sandesh Jhingan into a sliding clearance.

The Kerala Blasters man was again called into action some four minutes later as he diverted away a low cross from the right flank for a corner.

Having absorbed the initial pressure, India came out of their shell. In the 13th minute, India entered the penalty box for the first time and after a neat set of passes, Anirudh Thapa played in for Pritam Kotal who was overlapping down the right flank. Kotal’s shot was hit hard and low on target and forced the Chinese keeper into a sharp save.

Sandhu, who grew in confidence with every save and punch was on the spot yet again as Gao Lin found space for a free header from a corner. But his effort went straight into the arms of the Bengaluru FC man in the 15th minute.

Just two minutes later, India had a great chance to take the lead. Chhetri earned a free-kick down the left after nutmegging his marker. Thapa’s resulting free-kick was a precise one which flew over the defenders for Chhetri to come in on the far post. However, his volley from close range flew over the cross-bar.

At the other end, Sandhu was forced into a fine save after Lin found space in the box after being played through down the left in the 24th minute. He aimed for the far right corner, but Sandhu stood tall and blocked the shot with his feet.

As the match looked headed for a stalemate at the break, Jeje Lalpekhlua had half a chance in the 42nd minute as Chhetri showed great presence of mind to take a quick throw-in. But even with the rival Goalkeeper out his line, the Mizo sniper’s snap-shot from a tight angle was off target.

Marcelo Lippi, Head Coach of China who had won the FIFA World Cup as the Italian Coach in 2006 responded with four substitutions on resumption of the second half.

Five minutes after the restart, Lin struck the upright of Sandhu’s goalpost after connecting with a grounded cross from the right flank. The forward’s first-time strike was a sweet one but rattled the post, much to his, and the crowd’s despair.

In the 53rd minute, Gao was played in behind the Indian defence with a lifted pass but the Indian custodian was alert again and did well to close down the angle and clear the danger.

After riding the initial waves, the Blue Tigers pushed for an opener and in the 56th minute, Halicharan Narzary dispossessed his Chinese counterpart at the half-way line as he through the centre of the pitch. He laid the ball off to Udanta Singh down the right, whose shot flew over the crossbar.

The hosts continued to pile on the pressure and opted to bombard the Indian defence with aerial balls. A couple of free headers missed the target and forward Xiao Zhi also found the side netting in the 69th minute.

Just a minute later, Lippi’s boys were denied by the woodwork yet again as Wu Lei’s half-volley from eight yards out thundered against the crossbar.

In the 75th minute, Sandhu added another save to his tally as he flung himself across to his left and diverted a header away from goal.

Anas Edathodika who came in as a substitute made a timely block off the next attack to deny the Chinese forwards. And after a goalmouth melee from yet another corner, Sandhu and Jhingan produced some effective last-ditch defending on their own goal-line to get the ball away from danger.

Jhingan was in action on the other end of the pitch as well as he leapt highest to head the ball from a corner kick but his effort flew over.

India could have stolen the win in the final minute but even as Farukh Choudhary sneaked in between the two Central defenders, his shot was managed to be kept off by the Goalkeeper.