Goa Keen To Set The Record Straight Against Mumbai

Goa, October 23: Having made a solid start on the road in the Hero Indian Super League, FC Goa will look to carry on that momentum in their first home game at the Jawaharlal Nehru Stadium in Fatorda on Wednesday.
With four points from their two games, Sergio Lobera’s men now play hosts to Mumbai City FC. The Gaurs would have been disappointed to walk away with a 2-2 draw in their opening fixture against NorthEast United FC but displayed strong credentials with a smashing 3-1 victory away to defending champions Chennaiyin FC. 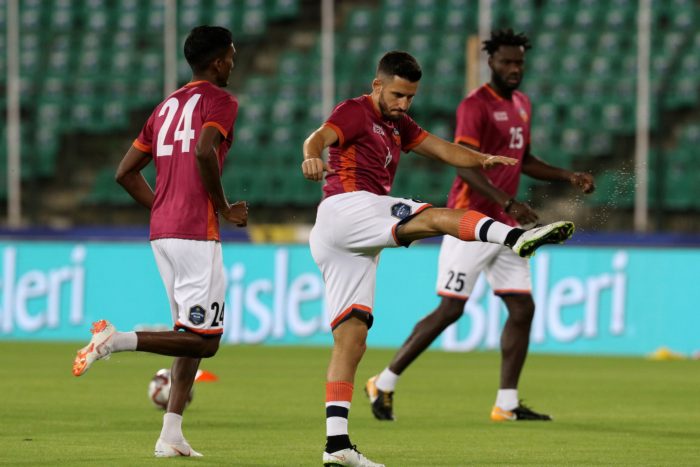 Despite losing the services of prolific playmaker Manuel Lanzarote to ATK, Goa’s attack doesn’t seem to have lost its teeth as the five goals scored in two matches have shown.  Last season’s Golden Boot winner Ferran Corominas has shown no signs of slowing down and has already bagged three goals in his two appearances.
“We always try to play an attacking brand of football and the idea is to win the game. That’s the most important thing. If you’re asking me if we are going to attack less so that we don’t concede, the answer is no. The idea is simple which is to try and attack like we did last year, ” said Lobera, who will be keen to make amends after FC Goa failed to beat Mumbai City in the last three fixtures.
In defence, Mourtada Fall has been an excellent addition with the Senegalese adept at bringing the ball out from the back. Chinglensana Singh has also shown an improved side to his defensive abilities.
Mumbai City, on the other hand, come into game on the back of an impressive 2-0 win over FC Pune City in the first Maharashtra derby of the season. Jorge Costa’s men had a stuttering start to their campaign with a home defeat against Jamshedpur FC followed by a 1-1 draw at Kerala Blasters.
“Goa have a very good team and a very good coach. It’s easy to understand what they want to do on the pitch. I will not speak of individual players but we are going to have a difficult game for sure. We respect them a lot but we also know what to do,” said Costa.
Costa will be glad to see Senegalese strike Modou Sougou get off the mark against Pune. He will also be happy to see Brazilian Rafael Bastos find some form after his lacklustre start to the campaign.
Mumbai’s attack had been toothless at the start with the Brazilian struggling for any rhythm but his penalty against Pune might just get his confidence back. Arnold Issoko has looked like an inspired buy for the Islanders with the Congolese showing his prowess in a man-of-the-match display in the Maharashtra derby.
Tags: FC GoaFCGHero ISLIndian Footballindian super leagueISLMCFCmumbai city fc
0Likes
Leave a comment