Game Against China Is Going To Be Tricky: Jeje Lalpekhlua

NEW DELHI, 8th October 2018 : Indian ace striker Jeje Lalpekhlua is looking forward to the friendly fixture against PR China as he feels it is the perfect platform to bolster the team’s preparation for the forthcoming AFC Asian Cup UAE 2019 and is going to be no less than a “tricky game for us.” 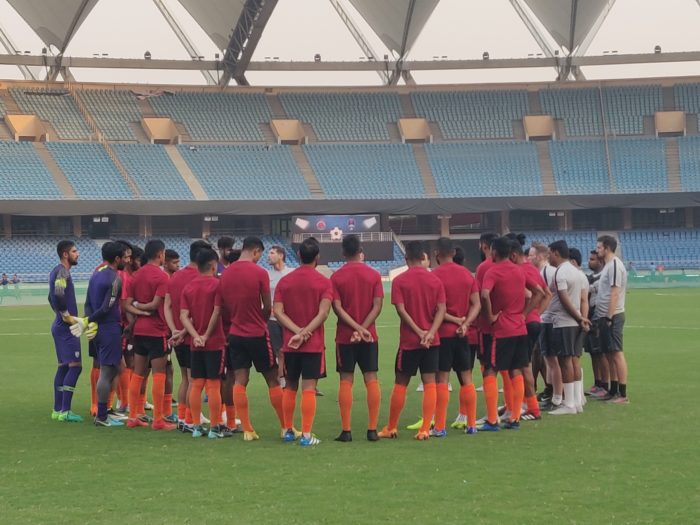 “I think this game is going to be very tricky. In order to accelerate our preparation for the Asian Cup, we need to play such game. However, we’re going to learn quite a few things from this game and we’re looking forward to it,” Lalpekhlua said on the sidelines of the two-day preparatory camp in New Delhi before the team leaves for China on October 10, 2018 to play their first-ever international friendly fixture on Chinese soil.

China are currently ranked 76 in the FIFA Rankings and the striker showed his respect for the Red Dragons as well.

“China are playing smart football now. The Chinese Super League has gone from strength to strength very much. They are more developed now and we have to play as a team to garner some positive result.”

Meanwhile, he also mentioned that the game is more important for the team at this moment than the result.

“The result is obviously important but the most important aspect is how we play the game”, he added. “The team-work is important. We have to work together. If we are able to do this according to our plan, we can get a positive result.”

He heaped praise for the AIFF Young Player of the Year Anirudh Thapa too.

“He (Anirudh) is a good player with a good football brain. He’s high on confidence and played really well of late. I hope he’s one to watch in future,” said Jeje.

The former AIFF Player of the Year further stated, “Playing away from your home is always difficult. But we will play the Asian Cup in the UAE and it’s going to be a big test for us. So, we need to play more away games now and the match against China is the right test to face.”