Every Game Is A Final, Says JFC Coach Ahead Of Kerala Clash

Every Game Is A Final, Says JFC Coach Ahead Of Kerala Clash

8
SHARES
159
VIEWS
Share on FacebookShare on Twitter
Jamshedpur, October 28: Two unbeaten sides square up against each other on Monday as Jamshedpur FC take on Kerala Blasters at the JRD Tata Sports Complex in the Hero Indian Super League (ISL) 2018 on Monday.
The teams are yet to lose a game this season but have just a win to show for their efforts. While the home team have played out three successive draws after their win over Mumbai City in the opener, the visitors have been involved in two draws after winning their opener against ATK.
Jamshedpur FC, with a possession-based style of play, have dominated games but their failure to convert chances and a lack of accuracy in shooting has contributed to their plight. The fact that star striker Tim Cahill is yet to attain complete match fitness could be an issue for coach Cesar Ferrando.
The Australian will play a part at some point against Kerala and the Men of Steel will look to him to provide some inspiration up front.
Defensively, they have looked good with Tiri marshalling the backline commendably. Mario Arques and Memo will be looking to dominate Kerala in midfield and set the tempo for Ferrando’s side.
Youngster Mobashir Rahman is still injured for Jamshedpur and Ferrando will have to make do without him. 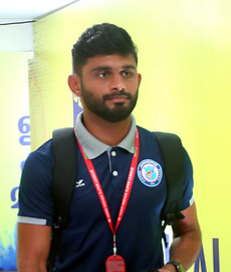 “In international leagues, there are 38 matches. But here (we have) 18 matches and so every game is like final. For me, tomorrow’s match is a final,” said Ferrando.
Kerala Blasters have played only three games so far but have not impressed since their 2-0 win over ATK in the season opener. Like their Monday’s opponents, Kerala paid for their profligacy in the subsequent matches and conceded late equalisers.
While he will want the strikers to score more, maintaining the team’s concentration levels throughout the 90 minutes will be high on coach David James’ mind.
The Englishman has never gone in with a full quota of foreign players this season, instead opting to give youngsters like Mohammed Rakip and Sahal Abdul Samad opportunities. They have done well so far and the former England goalkeeper will be hoping their encouraging performances continue against Jamshedpur as well.
The good news for James is that Anas Edathodika is back in contention for a start after serving his three game suspension.
“Anas sitting next to me is available for once and it puts a different perspective on team selection. It makes the whole group much more competitive. As a coach, what you want is everybody fighting for a place,” said James.
Jamshedpur are expected to hog the ball against Kerala who will favour a more direct approach, staying true to their managers’ nationalities. It makes for an intriguing battle!
Share8TweetShare