Goa, 28 October 2018: FC Goa climbed back to the top of the Hero Indian Super League on Sunday in an entertaining game here at the Jawaharlal Nehru Stadium, Fatorda which saw a six goal melee in first 35 minutes and teams being reduced to 10 men towards the final whistle. Sergio Lobera and his attacking game play ensured Goa walked off the pitch with 4-2 win over FC Pune City.

Ferran Corominas’ brace (5’, 35’) and goals from Hugo Boumous and Jackichand Singh gave the hosts their third win while Marcelinho (8’) and Emiliano Alfaro (23’) scored for the visitors who remain winless. Diego Carlos and Corominas were sent off late on as both teams finished the game with just 10 men.

Just like he had done against Mumbai, Corominas gave the Gaurs an early lead. A well-worked Goa move in the fifth minute saw Ahmed Jahouh release the Spaniard behind the Pune defence and the striker held off Gurtej Singh before applying a smart finish past Vishal Kaith. 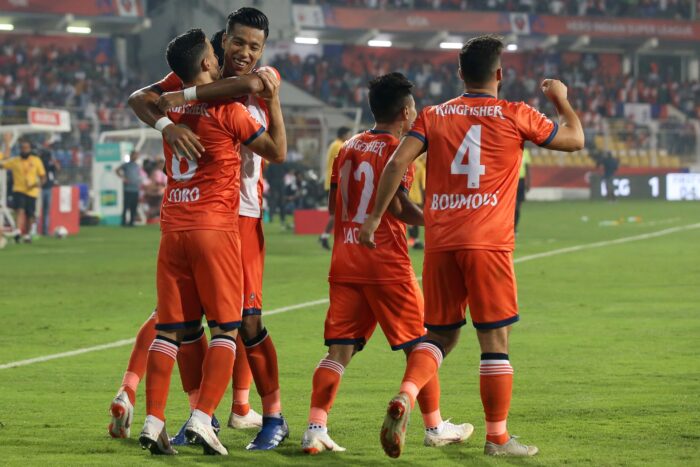 The Stallions hit back immediately though, as Marcelinho beat an outstretched Mohammad Nawaz with a brilliant chipped finish into the top-right corner.

In typical ping-pong fashion, Goa retook the lead by the 12th minute through another well-worked move as Coro turning provider this time. Boumous delivered an inch-perfect cross back to the midfielder to head past Kaith.

Coro had a second assist to his name just minutes later after he sprung the off-side trap before laying the ball for Jackichand to smash into an empty net.

It was a game of shaky defences as Pune once again responded in kind, this time due to an error by Mohammad Nawaz. The young goalkeeper was at fault after he was beaten at his near post by a fierce Alfaro shot.

A frantic first period saw attacks from both sides thrive as chances kept coming with regularity at each end but it was the hosts who extended the lead with Coro bagging his second of the night following a goalmouth melee.

The second half started just as frantically as the first with Alfaro and Marko Stankovic coming close to reducing Pune’s arrears on separate occasions.

Alfaro then earned a penalty for the visitors when he went down under Chinglensana Singh’s challenge after the defender had lost possession. However, Nawaz pulled off a fine save from his spot-kick to preserve Goa’s two-goal lead.

A goal-line clearance by Ashutosh Mehta at the other end denied Coro his hat-trick as both attacks continued to prosper.

The Gaurs frustrated the visitors by keeping a stranglehold on the ball and starving them of goal-scoring chances.

The visitors finished the game with 10 men after Diego Carlos was shown a straight red for his knee-high challenge on Seriton Fernandes.

Goa’s night would be marred towards the end as Coro was also shown a straight red card after he slid into a tackle on Stankovic with his studs raised.