Delhi Rescue A Point At The Death

Delhi Rescue A Point At The Death

6
SHARES
35
VIEWS
Share on FacebookShare on Twitter
Kochi, October 20: Kerala Blasters were thwarted at the fag end for the second consecutive Hero Indian Super League (ISL) match as Delhi Dynamos held them to a 1-1 draw at the Jawaharlal Nehru Stadium in Kochi on Saturday. 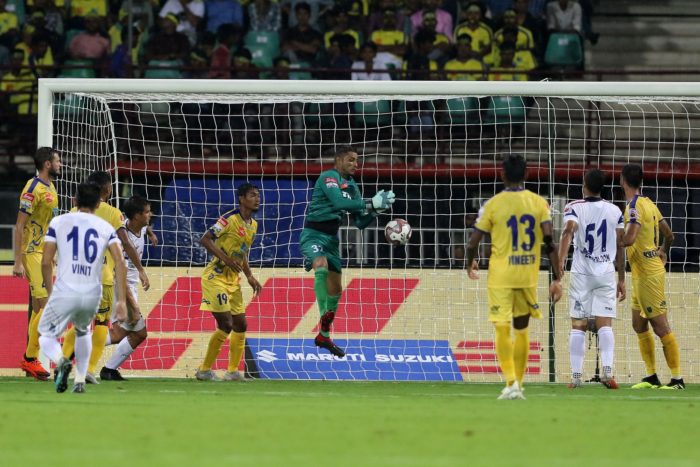 A 48th minute strike from CK Vineeth was cancelled out by Andrija Kaluderovic’s 84th minute header as Delhi’s run of scoring a goal extended to 14 matches. 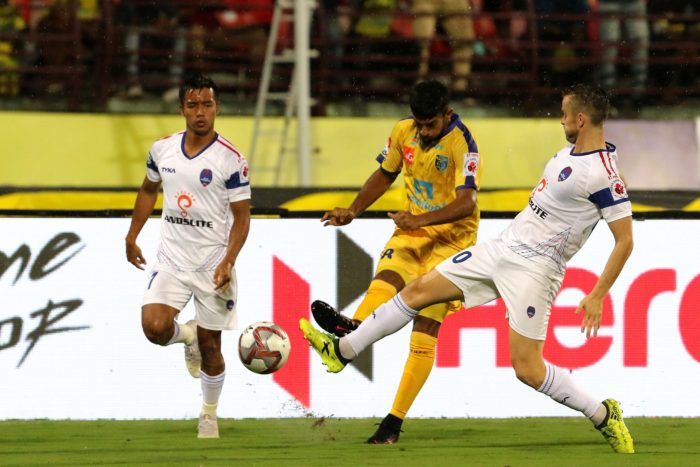 Amidst a heavy downpour in Kochi, it were the visitors who took control of the game in the first quarter with Kerala struggling to get hold of possession. Lallianzuala Chhangte, in particular, was looking threatening down the left flank for the Dynamos and his duel with Sandesh Jhingan was proving to be an intriguing affair.
Against the run of play, the hosts came close to grabbing the lead in the 22nd minute. A quick breakaway and a neat one-two between Stojanovic and Sahal Abdul Samad saw the Serbian striker unleash a sumptuous shot on the Delhi goal. Goalkeeper Francisco Dorronsoro was, however, alert enough to deal with the danger.
A mistake from goalkeeper Naveen Kumar moments later gave Kaluderovic two stabs at the Blasters goal but a goalmouth scramble saw the ball ultimately cleared. David James’ men then had two gilt-edged chances in succession following a quick counter-attack initiated by Vineeth. Lalruatthara’s low cross found its way back to Vineeth who scuffed his shot with the goal at his mercy. The rebound fell to Stojanovic who smashed the side-netting from an acute angle.
The best chance of the first period fell to Delhi in the dying minutes following Mihelic’s excellent ball to find Romeo Fernandes. The Goan winger squared the ball up for Zuiverloon but the Dutchman’s cushioned effort scraped agonisingly wide of the post with Naveen Kumar well beaten.
Matej Poplatnik was promptly introduced after the half-time interval but it was Vineeth who had the crowd roaring in delight. A Blasters’ corner was only half cleared to Poplatnik who sent the ball immediately back into the box for Vineeth. The striker shrugged off the challenge from Rana Gharami far too easily before poking a clever finish past Dorronsoro.
At the other end, Lakic-Pesic denied Romeo with an excellent block but the hosts should have doubled their lead when Seiminlen Doungel and Poplatnik found themselves in a two-on-one situation. Doungel went for goal instead of releasing his unmarked team-mate and paid the price with his effort going wide. 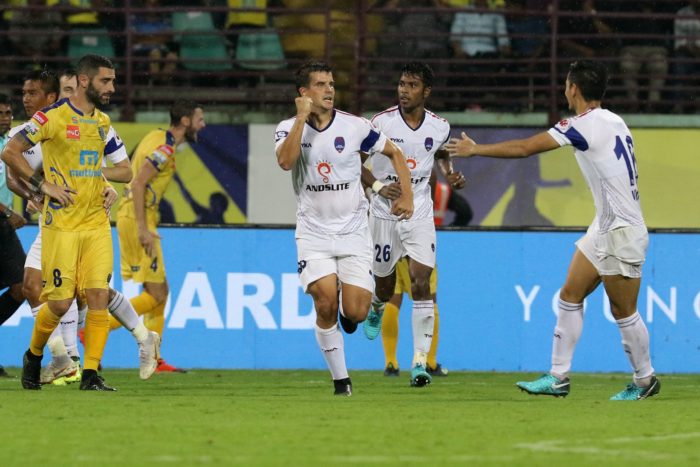 With Jhingan injured on the floor due to a cramp, Delhi found a deserved equalizer in the 84th minute through Kaluderovic as he headed home from inside the box.
Kerala failed to pick three points for the second game running on home soil, thanks to a late goal conceded while Dynamos are still searching for their first win.
Share6TweetShare