NEW DELHI, SEPTEMBER 18th, 2018 : When India U-16 National Team defeated defending AFC U-16 Champions Iraq 1-0 in the WAFF Cup in early August, little did anyone believe that India was capable of upsetting one of the best youth teams in Asia. 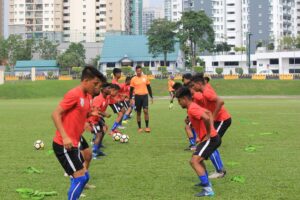 The AFC U-16 Championship reeks of a similar tale. The Indian U-16 National Team have been drawn in Group C alongside powerhouses Iran, a strong Vietnam and perhaps a stronger Indonesia. A quarterfinal berth at the U-16 level has been quite improbable for U-16 National teams but if all India make it to the last 8, a possibility to face either Korea Republic, Australia or Iraq in the quarter-final stages loom large.

“We are the dark horses of this tournament and at the same time we possess the ability to upset some of the better youth teams as we have in the past.” The final goal is to qualify for the FIFA U-17 World Cup.

“First we have to qualify and progress from the group stages. That is our main aim. We will take one match at a time. It is too premature to think about the quarterfinals right now. We need to qualify for it,” stated Bibiano.

Bibiano’s wards reflect the coach’s feelings agreeing that although the challenge will be massive, the thought of upsetting the odds stays a hidden joy.

“We might be the dark horses but on our day we can defeat any team in the region. We just have to turn up on the day that matters in our quest to create history,” informed Bhuvnesh Shendre.