‘Confidence And Guts’ The Secret To Vikram Pratap Singh’s Success

‘Confidence And Guts’ The Secret To Vikram Pratap Singh’s Success

NEW DELHI, 19th September 2018 : Goals win you matches. But what’s more important than goals, are strikers who are able to convert half chances, both inside and outside the box. That needs the ability to believe in yourself and a certain kind of guts to achieve the less achievable. 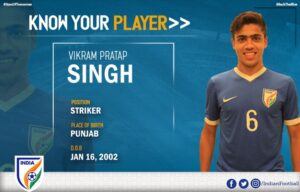 Hence, when Vikram Pratap Singh ran away from the Chandigarh Football Academy in the night to watch a movie, there was perhaps the indication of the same – confidence and undeniable guts.

That confidence and guts appeared several times, over the course of Vikram’s career with the Indian U-16 National Team. Be it the striker’s first hattrick against Jordan or be it the left footer against Nepal in the SAFF Finals, Vikram’s guts and confidence were always on display.

“As a striker you have to take half-chances and try and score a goal,” the forward from Chandigarh, Punjab said. “Glory is only worth it if you achieve glory.

“I have been fortunate enough to have coaches from CFA and AIFF that have helped me realize my potential and how to score from half-chances,” he added.

An integral part of the Indian U-16 National Team, Vikram was awarded with the Most Valuable Player in the Tournament in Serbia and won the highest goal scorer award in China. Not only that, the striker has been a regular feature for the Indian U-16s in the goal-scoring charts.

“The first time I scored a hattrick for the nation against Jordan was a very emotional moment for me. It made me immensely proud of what I have achieved and how far I have come in my football journey.”

With humble roots, Vikram was a Chandigarh Football Academy cadet before moving on to the set-up under the Indian U-16 National Team. A move which has changed his life.

“Getting selected in the national team was the proudest moment of my life and ever since I have been a part of the squad, my game has increased ten-fold and I have only the AIFF coaches and staff to thank for that.”

With the AFC U-16 Championship next, perhaps Vikram’s ability to score from half-chances will prove pivotal in India’s bid to qualify for the 2019 FIFA U-17 World Cup.

“We will try our level best to return home with history in our pockets. I will try my best to score in every match. We are already preparing hard for the Championship and will give our everything to be in the pages of history.”

But Vikram has bigger goals. “I want to win the AFC U-16 Championship as well. It is a tough task but it is not impossible. We can win the Championship if we believe in ourselves and have the grit”

“We will be taking one match at a time and the first goal is to progress out of the group stages. In the group stages the most difficult opponent will be Iran, but we have devised a plan for them as well.”

Half chances or not, Vikram is geared up for the AFC U-16 Championship and will settle for nothing less than showcasing his confidence and guts, once more.

I Am Their Biggest Fan, Says Sunil Chhetri