Can the Blue Tigers avenge Bahrain loss from eight years ago?

Eight years ago, on January 14, 2011, in the AFC Asian Cup, India had gone down fighting against Bahrain 2-5 in the final group match; bowing out without a point from a tough group.

Eight years on, India gear up to take on Bahrain on the same day — where a victory will ensure Sunil Chhetri and the boys a qualification; into the Round of 16, an achievement which is bound to speak wonders for Indian Football.

The match presents an interesting situation with the same date – separated by eight years presenting the Indian team an opportunity to exact revenge from their counterparts.

In the AFC Asian Cup 2011, India was drawn against tough opponents – South Korea and Australia, both of whom progressed to the semi-finals. Australia went on to finish as the runners-up in 2011 following it up with a championship win in 2015 on home soil.

Sunil Chhetri, the talisman striker, was a part of the squad eight years ago in Doha and even got a goal for India. He had scored the second goal for India in the 2-5 loss. 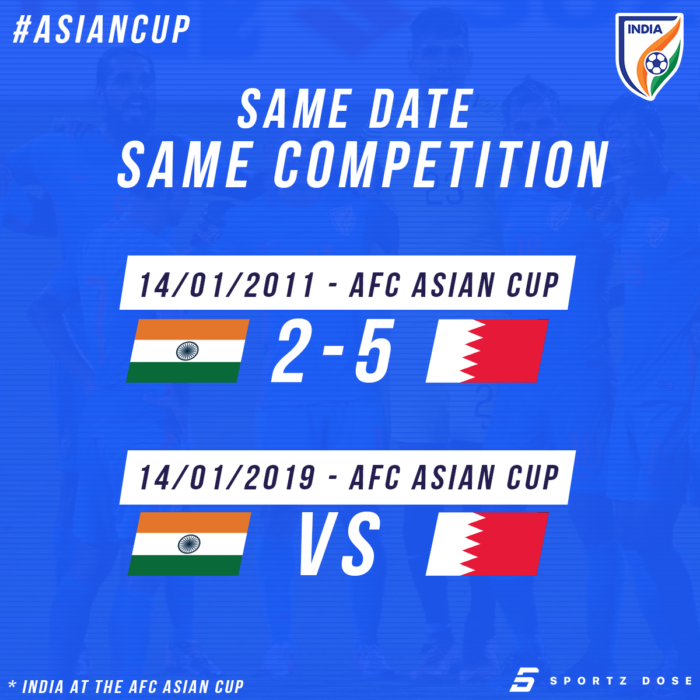 Bahrain scored an early penalty goal converted by Faouzi Mubarak Aish, however, the Indian side struck back quickly. Gouramangi Singh, the centre-back got the equalizer within a minute of the Bahrain goal making it all square. Ismail Abdul-Latif, the Bahrain attacking winger, was in devastating form and took the game away from India with a first half hat-trick. Bahrain ended the first half with a massive 4-1 lead to crush the Indian hopes of a point from Doha.

Sunil Chhetri got his name on the scoresheet when he headed in a simple effort after the ball struck the post twice; once from Gouramangi Singh\s long-range effort and then again by striker Abhishek Yadav.

History has repeated itself setting up the same clash on the same date, eight years apart but Sunil Chhetri and co will hope to end up on the winning side this time around. The only other player who was part of the squad back then as well was current goalkeeper Gurpreet Singh Sandhu.

The young Gurpreet was an understudy to the ‘Spider-man’ Subrata Pal and was on the bench back then. However, he will play a key role for India this time around between the sticks.

Indian coach Stephen Constantine will hope the side delivers on their promising start in UAE after the thumping win over Thailand in their opening fixture. Despite the loss against UAE in the second match, India impressed in attack and rued the lost chances in front of goal.

A draw will be enough for the Indians to make it to the Round of 16 in the AFC Asian Cup 2019; however, with the prospect of revenge and chance to craft history, they will aim for nothing less than a win.