Bengaluru A Goal Too Good For ATK

Bengaluru A Goal Too Good For ATK

Erik Paartalu of Bengaluru FC celebrates the goal during match 56 of the Hero Indian Super League 2018 ( ISL ) between Bengaluru FC and ATK held at the Sree Kanteerava Stadium, Bengaluru, India on the 13th December 2018 Photo by: Deepak Malik /SPORTZPICS for ISL

7
SHARES
124
VIEWS
Share on FacebookShare on Twitter
Bengaluru, December 13: After back-to-back draws, Bengaluru FC returned to winning ways in the Hero Indian Super League with a solitary goal win against ATK at the Sree Kanteerava Stadium, Bengaluru, on Thursday.
It was Erik Paartalu, who scored the winner when these sides met in Kolkata earlier this season, and the Australian midfielder proved to be their nemesis yet again. A 37th-minute header from the Aussie separated the teams and gave the hosts their eighth win of the season.
Bengaluru extended their lead at the top of the table to six points ahead of the international break and preserved their unbeaten start to the season, while ATK remain sixth with 11 points from 12 matches and without a win in six matches.
The teams started with urgency that resulted in openings at both ends. Kean Lewis dribbled past Ankit Mukherjee and crossed for Sunil Chhetri in the box but the India international shot wide. Within minutes, Ricky Lallawmawma found Jayesh Rane’s run into the box from the left flank and the Indian winger’s shot was blocked by Nishu Kumar.
Things heated up as ATK denied space for Bengaluru to freely operate in midfield and the tackles started flying in as the half progressed.
In the 19th minute, ATK’s Gerson Vieira laid the ball for Everton Santos who sent a powerful shot towards Gurpreet Singh’s goal. The Indian goalkeeper got his body behind the effort and saved.
Bengaluru took the lead in the 37th minute following a period of consistent pressure. Udanta Singh won possession on the right and Bengaluru switched play over to Kean Lewis on the left who played an exquisite cross into the centre of the box. Paartalu sneaked in between John Johnson and Andre Bikey, leapt above the pair and glanced a header into the net. 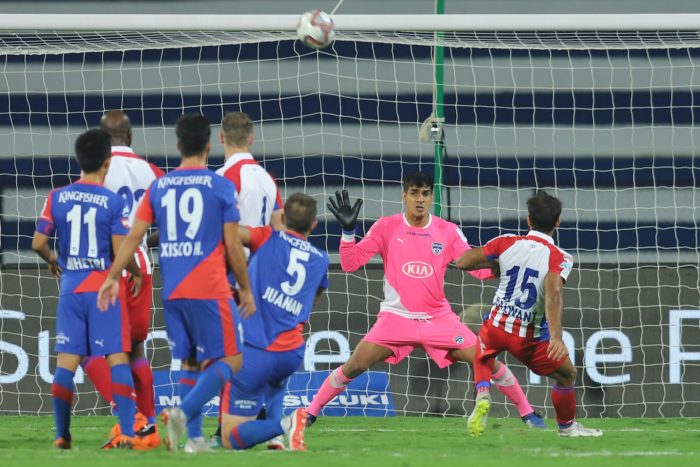 Two minutes into the second half, ATK striker Balwant Singh ghosted in behind the Bengaluru centre-backs to latch on to a long free-kick from the visitors’ own half. Despite a head start over the defenders, Balwant was dispossessed inside the box with a brilliant recovery tackle by Juanan before the striker could get a shot away.
The Bengaluru defence was caught watching the ball again as Manuel Lanzarote swung a free-kick into the box in the 57th minute. Balwant Singh moved into the space between the defence and the goalkeeper but blasted his effort over the crossbar from five yards. 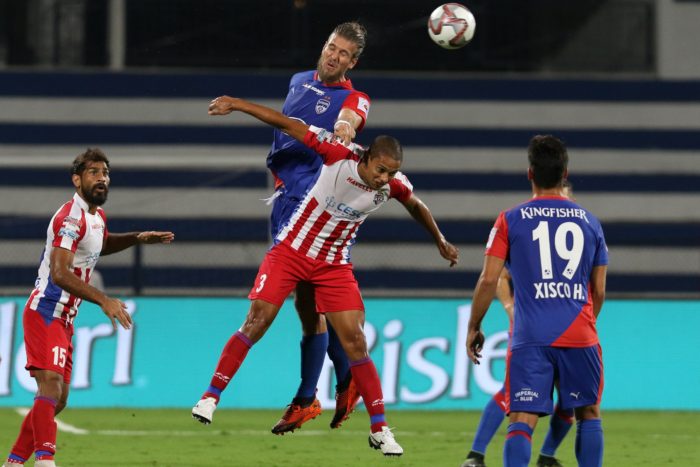 ATK went close again in the 68th minute when John Johnson’s through-ball from the back released Balwant into space behind the hosts’ backline. The Indian striker dribbled into the box and struck a low shot that rolled just inches wide of the goal.
Udanta Singh could have doubled his team’s lead in the 73rd minute. Dimas Delgado threaded a well-timed through-ball for the Indian winger who skipped past Lallawmawma, dribbled into the box but sliced his effort wide.
Despite concerted effort from ATK to sneak in an equaliser in the closing stages, Bengaluru remained firm at the back to win all three points.
Share7TweetShare