MUMBAI, August 21: SportVot’s Sheru Classic Maha Mumbai Kabaddi League, as it entered its last week before the semi finals and the grand final on the 27th and 28th of August, 2022, is becoming more intense and cut-throat by the day.

The eighth day of the league witnessed some stellar performances which led to an interesting shift in the points table. The day started with the men’s junior category matches, Mumbai che Maharaje registered  a one-sided match with the help of an outstanding performance by all rounder Om Kudale, registering 29 raid points and 2 defence points.The next  sub-junior matches helped August Kranti Express and Namo Bharat rise to the second and fourth spot respectively in the points table. The Goregaon Gladiators, also by the smashing performance of all rounder Uddhav Mharnur, opened their account and got the crucial first  two points in the tournament. 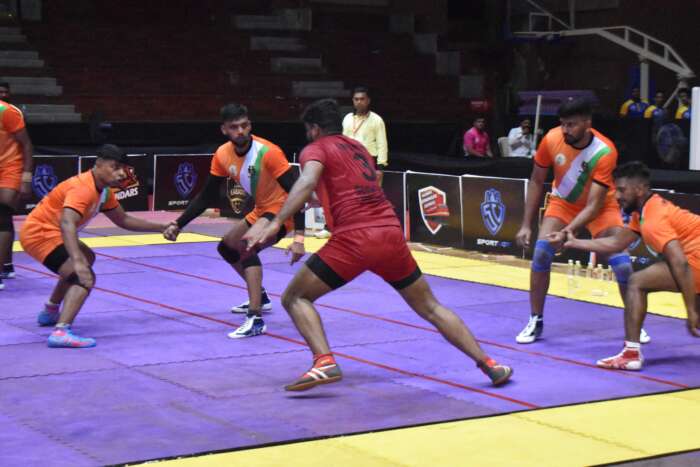 The men’s junior category matches also created a stir in the points table with Borivali Bahubali and Gavalli Dhurandhar rising to the third and fourth position with 5 points each.

However, it was the women’s senior matches that enjoyed the most exciting tussle as the Goregaon Gladiators rose to the top of the points table after beating the previous table toppers Mumbai chi Mahashakti, and the second match displayed the Mumbai Upnagar Express’s Nikita Utekar at her best as she overpowered the Mumbai Ultras Kabaddi Club and grabbed the ‘Player of the Match’ as well as the ‘Player of the Day’ award.

The game of kabaddi with Sheru Classic Maha Mumbai Kabaddi League has really taken the centre stage in the city of dreams and you can catch the LIVE action and enjoy the battle on India’s biggest Sports Hub, SportVot.