Kolkata, October 4: NorthEast United FC kept hunting for a goal which they eventually managed to get in the end as they got the better of 10-man ATK in an intriguing Hero Indian Super League battle at the Vivekananda Yuba Bharati Krirangan, Kolkata, on Thursday.

With left-back Sena Ralte being issued the marching orders just after the half an hour mark, ATK were playing with their backs to the wall for large part of the match. After much probing, NorthEast made their advantage count towards the end when Rowllin Borges headed the winner in the 89th minute.

The visitors started the brighter of the two sides with a sweeping move down the left resulting in Federico Gallego finding some space for a shot but Gerson Vieira was on hand to close down the danger.

The hosts’ first real attacking threat came after some good work by Balwant Singh down the left flank. The India forward set the ball up for Manuel Lanzarote but the Spaniard’s snapshot was some way off target.

The home side were reduced to 10 men as early as the 32nd minute when Sena Ralte was awarded a second yellow card for a stamp on Nikhil Kadam. Just minutes earlier, the left-back was booked for hacking down Redeem Tlang on the edge of the ATK box.

The visitors nearly profited from the man advantage in the dying minutes of the first half with Bartholomew Ogbeche and Gallego combining well to release Tlang down the left. The winger’s low cross across the face of goal found Ogbeche’s run but defender John Johnson got in a foot to deny the Nigerian.

Lanzarote’s sweetly struck free-kick at the stroke of half-time could have given ATK the lead against the run of play but Rehenesh was alert enough to avert the danger.

As expected, it were the Highlanders who kept most of the ball in the second half with Steve Coppell’s men looking to play on the break. Coppell’s defensive organization came to the fore as ATK’s 10 men held firm in the face of NorthEast’s relentless forward forays.

With the home side looking defensively sturdy, Eelco Schattorie took off midfielder Jose Leudo with Ghana’s Augustine Okrah coming on instead.

However, ATK nearly took a shock lead from a Lanzarote set-piece with John Johnson’s glancing header going agonisingly wide of the post.

The Englishman was a rock at the heart of the ATK defence and was on hand to deny Ogbeche a simple tap-in after a cross from Gallego in the dying minutes. 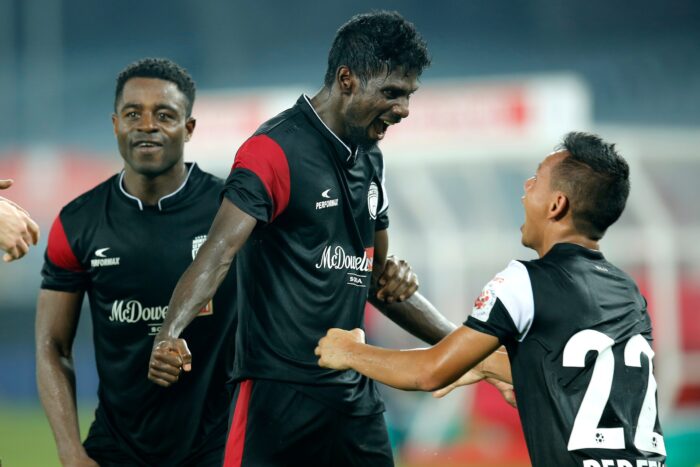 But the Highlanders would eventually find the winner in the dying minutes. Rowllin Borges’ well-placed header from a Gallego corner finally broke the deadlock to send Schattorie’s men to the top of the table with four points from two matches. ATK are yet to open their account.

Everyone Can See How Much Indian Football Has Improved: Chennai City FC Coach Akbar Nawas