Franchises from Ahmedabad, Calicut, Chennai, Hyderabad, Kochi and Mumbai to be a part of the league starting February 2, 2019. 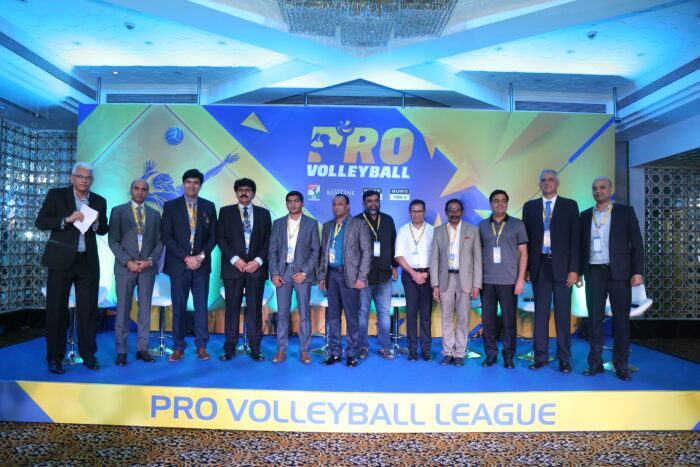 Slated to be held from February 2nd to the 22nd over two legs, the league has also received the support of Olympic Silver Medalist PV Sindhu, whose father represented India in the sport.

On the sidelines of the event, Tuhin Mishra, Co-founder & MD, Baseline Ventures Pvt. Ltd said, “We believe that the league is going to be the much-needed shot in the arm for the sport in India. We are starting the league in two cities that already have a strong following and fan-base for the sport. We are grateful to VFI, FIVB, Sony Pictures Networks India and all our team owners for believing in our vision and sharing the same level of commitment to the league and sport.”

President of VFI, S. Vasudevan, also sounded optimistic about the league and its future. He said, “Volleyball is a sport with great mass appeal and the league is bound to be a massive success. India loves its volleyball and everyone will get to see that adulation for the sport when the league takes off in February.”

Present at the team announcement event, VFI Secretary General, Ramavtar Singh Jhakar said, “The Pro Volleyball League will play an important role in development of the sport. This league will not only bring in top international talent from across the world but will also give a chance for the emerging talent from India to learn from the best in the business.”

Luis Alexandre, Director Asia and Oceania, FIVB, said, “We have always looked at India as a country with great potential. The Pro Volleyball League is a step in the right direction for the sport. Volleyball is a fast and exciting sport and perfect for television. We at FIVB extend our full support to the league and wish them the best for the inaugural edition.”

Pro Volleyball League’s first season will be held in two volleyball hotbeds of India i.e. Kochi (Rajiv Gandhi Indoor Stadium) and Chennai (Jawaharlal Nehru Indoor Stadium). Each of the six teams will comprise12 players including two foreign players, one Indian icon player and two Indian U-21 players. The six teams will be fighting it out over a total of 18 matches with each team playing each other once in a round-robin format and the top four teams qualifying for the semi-finals.

Prasana Krishnan, Head – Content, Sports, Sony Pictures Networks India (SPN), said, “We are pleased to be the official broadcaster of the inaugural edition of the Pro Volleyball League. SPN is committed to building a multi-sport viewing culture in India which makes the Pro Volleyball League a great addition to our sports portfolio. Volleyball was among the top sampled sports in the recently concluded Asian Games and the Rio Olympics in 2016 and we are sure that the league will play a catalytic role in further developing both the sport and talent in the country.”

The inaugural season of the Pro Volleyball League will be broadcast on SONY SIX (English) and SONY TEN 3 (Hindi) from 7 :00 PM – 9:00 PM IST.