13
SHARES
91
VIEWS
Share on FacebookShare on Twitter
Pune, November 2: Kerala Blasters were handed their fourth successive draw in the Hero Indian Super League (ISL) 2018 after being held by FC Pune City 1-1 at the Shiv Chhatrapati Shivaji stadium in Pune on Friday.
A class strike from Marko Stankovic (13’) got Pune City up and running only to see Nikola Krcmarevic (62’) pull Kerala Blasters level in the second half. The result pulls Pune City, still without a win, off the bottom of the table temporarily while Kerala Blasters have moved up to the fifth spot with seven points from five games.
It were the visitors who got off to an energetic start with CK Vineeth testing the Pune City custodian Kamaljit Singh in the third minute. Kerala Blasters continued to pepper Kamaljit’s goal with shots but the goalkeeper denied Vineeth and Slavisla Stojanovic in the space of minutes.

Against the run of play, Pune City drew first blood in the 13th minute through a stunning strike from Stankovic. The Austrian gained possession in midfield before finding the top corner from about 30 yards out with a terrific left-footer. 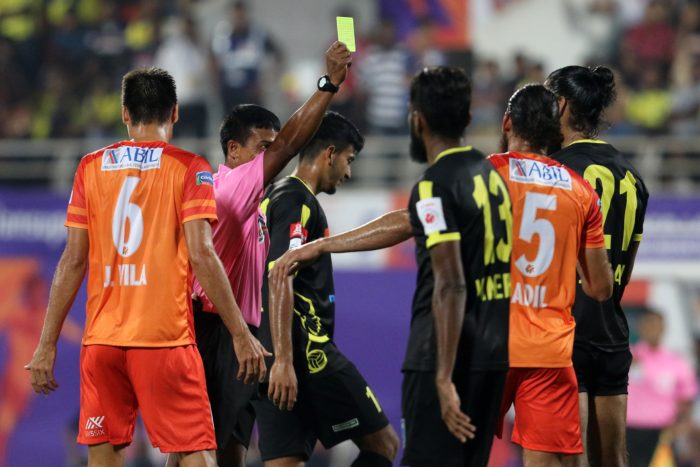 The goal infused some confidence into Pune who should have doubled their lead when Emiliano Alfaro missed a free-header from Stankovic’s free-kick.
Pradyum Reddy’s side began to sit back, however, and play on the counter. Alfaro and Marcelinho did pose a threat on the break but Kerala were not without opportunities themselves. Sahal Abdul Samad imposed himself in midfield while Nikola Krcmarevic almost bundled the ball home following a scramble.
Kerala continued to attack Pune City in the second-half but it were Pune City who were handed a glorious chance to double their lead. Krcmarevic was adjudged to have pushed Alfaro in the box and the referee awarded a spot-kick. The Uruguayan, however, sent his effort crashing against the bar, much to Kerala’s relief. Crucially, Alfaro had missed a penalty against FC Goa in the previous game as well.
Six minutes later, Pune were made to pay for that miss when Krcmarevic lashed a loose ball from a half-cleared corner home from inside the box.
Pune showed a bit more urgency in their bid to find a winner while Kerala also endeavoured to find one. But it was not to be as both teams shared the spoils
Share13TweetShare