by Gaurav Kadam
in Uncategorized
0 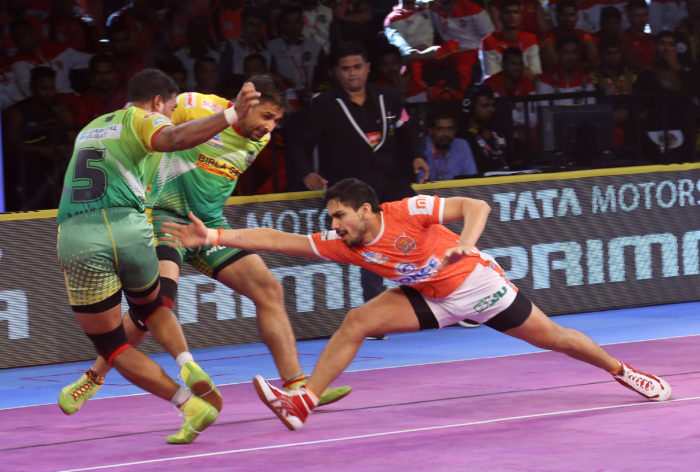 Pardeep Narwal, who reached the 800-point landmark in the history of Pro Kabaddi, scored a whopping 27 points as Puneri Paltan’s famed defence had no answer to his raiding prowess. For Pune, GB More put in a strong raiding effort and scored 13 points but didn’t get support from his defence.

Pardeep Narwal got off Patna Pirates to a storming start with a super raid in the 2nd minute. Narwal scored the first six points for Patna in three minutes to give them 6-3 lead. Puneri Paltan suffered an all out in the next minute as they trailed 4-9.

Sandeep Narwal scored his third point as Puneri Paltan tried to mount a comeback to trail 6-9 after five minutes. In the 8th minute Patna Pirates led 13-8 and were looking in fine form with Pardeep Narwal leading their charge. At the end of the first half Patna Pirates led 24-19.

The second half started in a similar fashion as Pardeep picked up a two-point raid and Patna inflicted an all out to lead 30-21. Puneri Paltan had no answer to Pardeep Narwal and were left floundering.

GB More tried his best to keep the margin of defeat respectable for Puneri Paltan. Sandeep Narwal also did put in a performance for Pune but they still couldn’t match up to Patna Pirates.

With less than 10 minutes to Patna Pirates held a 13-point lead and looked in command. Pardeep continued to torment Puneri Paltan’s defence and in the process also became the first man to reach the 800 raid point landmark in the history of Pro Kabaddi League. Patna ran out comfortable winners with a 17-point victory margin in the end.