Shillong, November 23, 2018: Champions Minerva Punjab were held to a 2-2 draw away at Shillong’s JLN Stadium by a young and exciting Shillong Lajong FC and after playing almost the entire second half with 10 men. Ghanaian frontman William Opoku and Nigerian midfielder Philip Njoku scored for the champions while Buam and Allen Nongbri got on the scoresheet for the hosts.

The game though was absorbing and Shillong yet again showed why they are being considered as one of the most dangerous sides in the league, with some pleasing eye-catching football. For Minerva, the positives will be the fact that their forward Opoku finally got a goal to himself in this season’s campaign and so did Nigerian recruit Njoku. 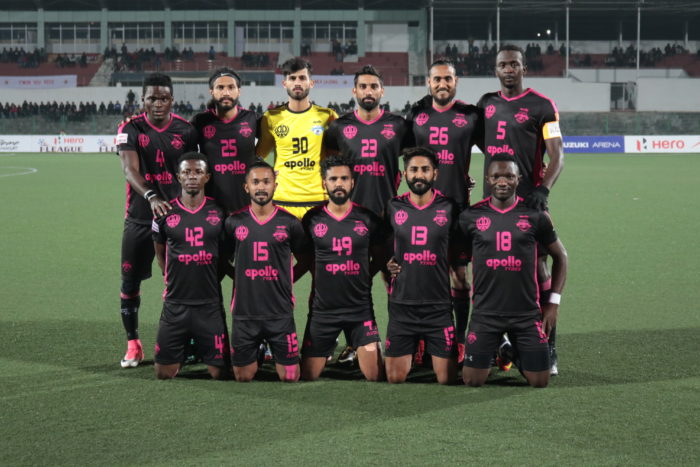 Both the gaffers Alison Kharyntiew and Minerva’s Irish coach Paul Munster made quite a few changes to the starting eleven for this game. Alison made five changes and Paul three as both coaches opted for a change in goalkeepers. Neithovilie Chalieu was back in the Shillong goal after Alison’s brief flirtation with Purbha Lachempa while Arshdeep Singh made the first start in the Minerva goal replacing Bhaskar Roy.

Shillong attacked from left to right in their all reds while Minerva were in their black and pink away outfits on the artificial turf of the Rajiv Gandhi stadium.

From the outset, it was clear that the champions would press high and the hosts seemed to be wanting to build patiently from the back with small ground passes between themselves.

Lancine Toure got to the end of a free-kick with his head, which has so far accounted for two goals in the campaign, and another corner with his feet, but both were off target. 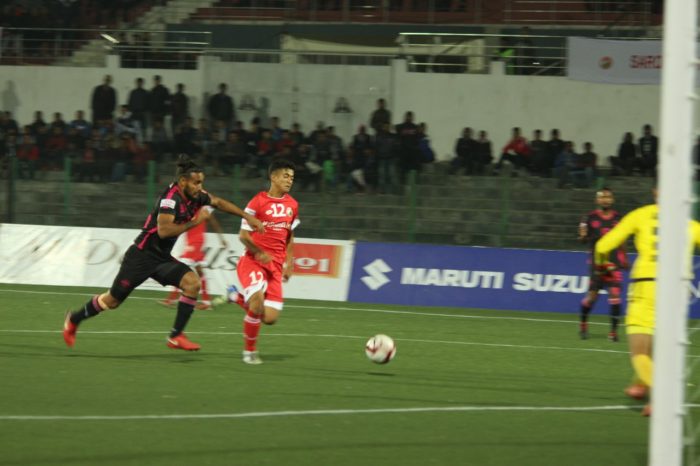 Then Njoku put through William Opoku inside the box with a lovely long ball from midfield, but the Ghanaian failed to reach the end of it for Neitho in the Shillong goal to collect.

In the 24th minute, quite against the run of play, it was the hosts who went ahead, thanks to a defensive error from the champions. 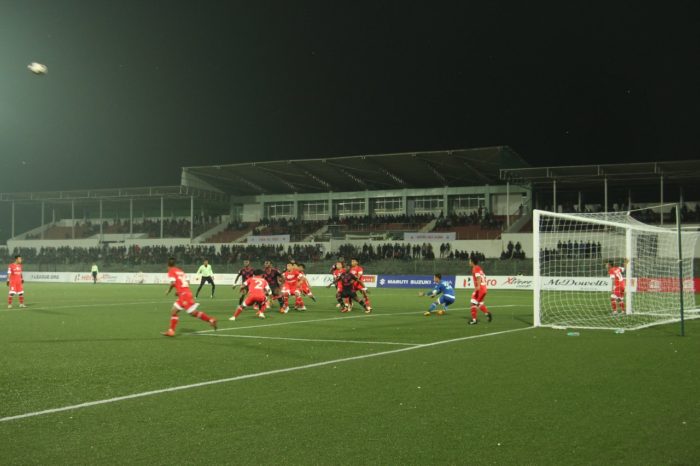 On the counter, Phrangki Buam was first sent on his way on the left flank but the ball seemed to have been comfortably covered by Deepak Devrani, playing his first game of the season. The rust showed as the burly defender played a callous back-pass towards his goalkeeper, but it was so feeble that a chasing Buam intercepted it, ran inside the box and floated the ball neatly over an onrushing Arshdeep for a quality finish.

Minerva kept pressing, all the more this time, to get the equaliser.

Njoku was having a good game and he again put in a wonderful cross for Opoku in the 35th minute, but the latter’s header with the goalkeeper off his line and beaten, lacked direction. Opoku was again in the clear when Jagpreet put him through inside the box with a deft lob over the defenders, but his strike could not avoid the body of defenders in front and went wide again.

Shillong then doubled their lead in the 44th minute, this time with a wonderfully constructed counter-attacking move. Buam it was who initiated it this time, running through the middle to find Samuel Lyngdoh free on the right and Allen Nongbri making a wonderful overlapping run from the left back position. Buam went right to Lyngdoh who then crossed to Nongbri inside the box on the left, for the defender to bring about another calm finish, tapping past Arshdeep with his left boot.

The youngsters from Shillong were clearly enjoying themselves and perhaps a little casual and carefree approach just before half-time led to their lead being reduced.

In the second minute of added time, Edafe chased a long ball from just inside the Shillong half, into their box and Neitho charged out to intercept but muffed up. With the goal unguarded, Edafe passed from the left to a more centrally located Opoku inside the box, whose powerful strike went in after hitting a diving Neitho and a Lajong defender on the way. It was the last kick before the half-time whistle.

The second-half began in utter confusion. It first seemed that Minerva had made three changes, to begin with- Akash Sangwan, Nigerian Bala Dahir and Ivorian Alexandre Kouassi in place of Deepak Devrani who made that blunder with the first goal, Jagpreet and Akashdeep Singh.

However a minute later, Bala Dahir was found to be sitting on the bench again as the Minerva management had miscalculated and were playing with six foreigners on the pitch, instead of the allowed five. As a result, they had to now play the game with 10 men on the pitch.

That did not stop the champions from going all out for the equaliser though. Kouassi was adding a lot of zest down the right flank and Opoku was guilty of squandering a couple of more chances.

Shillong in the meantime seemed content to be soaking in the pressure and attacking.

Minerva finally got their equaliser in the 75th minute after some scrappy defending from Shillong.

Njoku passed the ball forward to Kouassi on top of the Shillong box on the left. Kouassi wanted to play further to the left, but the ball deflected off Aibhan and came back in where Kharsong came up with a weak clearance.

An onrushing Njoku, who had Kharsong’s clearance bounce favourably off his chest in front of him, took a touch and unleashed a powerful strike to bulge the back of the net.