Imphal, October 26, 2018: Manipur’s Neroca FC, who ran a fairytale debut campaign last season, are all set to renew their love affair with the Hero I-League as they get ready to host Kolkata giants Quess East Bengal (QEB) at Imphal’s Khuman Lumpak stadium on October 27, 2018.

The Neroca-QEB game will be the second game of the 12th Hero I-League edition and both teams look equally balanced on paper, with both outfits having Spanish coaches locking horns for the initial bragging rights, as a fresh season beckons.

Neroca almost pulled off a sensational debut title win last season before finishing an honourable second, while QEB could only manage a fourth-place finish at the end of a nerve-wracking final day where four teams had a chance at the title before Minerva Punjab clinched the coveted crown. 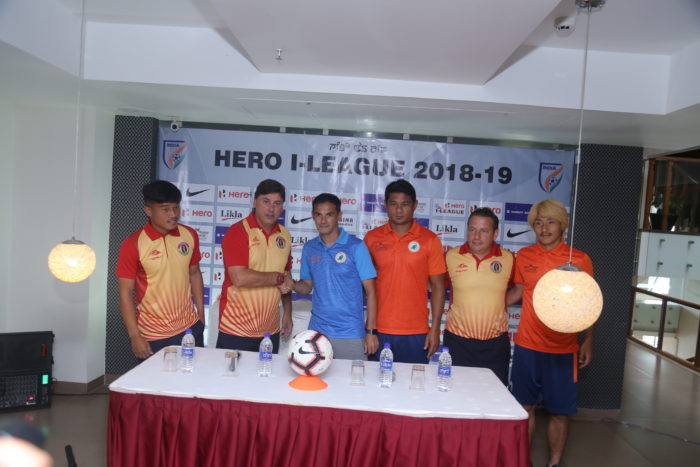 The home side, besides bringing in Spaniard Manuel Fraile, who helped Aizawl win the Mizoram Premier League three years back, have also managed to retain the nucleus of the side from last season, while also bolstering it with a few top foreign signings. Prominent among them being the tireless Japanese winger Katsumi Yusa, who has earned immense popularity with the fans in India with his energetic displays. Also, Brazilian Eduardo Ferreira, a rock-solid defender who has played with distinction with both the Kolkata giants and who, alike Katsumi, will be up against his former team on Saturday.

In attack, Neroca will feel fortunate to have striker Felix Odili Chidi and winger Singham Subash Singh. The Nigerian Felix and the local lad Singam Subhash had 11 goals between them in the last edition. Australian Aryn Williams is also retained from last year and brings a lot of maturity in midfield. Veteran custodian and captain Lalit Thapa should be a safe house guarding the Neroca goal, but Italian Mauro Boerchio’s presence in the goalkeeping quartet, someone who was with coach Fraile in Mongolia, suggests Thapa might face a tough competition.

Coach Fraile seemed undaunted at the prospect of facing QEB, sounding positive at the pre-match press conference when asked about their opponent’s pre-season in Malaysia, “We are a small club with a big heart. Every team has their own training methods. I am here to win every match and feel at the moment Neroca is the best team in the world.”

As far as the team from Kolkata is concerned, they would be hoping that brand new sponsors in the form of IT company Quess, would usher in a turnaround in fortunes as they desperately seek the first Hero I-League title.

Given their stature in Indian football, the desperation is not surprising.  They have also roped in a Spanish coach, Alejandro Menendez Garcia and had a very successful pre-season under him in Malaysia where they won three matches and drew one. Coach Garcia has also had immense success in Thailand and China and would be looking to help the Red & Golds from Kolkata break their Hero I-League jinx.

He has a highly talented squad of players at his disposal too to help them achieve that dream. In goal, coach Garcia has options between Rakshit Dagar, Mirshad and Ubaid C.K., all of whom have had their days under the bar. Then there is the trio of Bali Gagandeep (forward), Senegalese Kassim Aidara (midfield) and Kamalpreet (defender) secured from defending champions Minerva Punjab FC. The two Ralte’s Laldanmawia and Lalrindika will look to martial the midfield along with Aidara and local boy Yami Longwah.

However, the two trump cards up coach Garcia’s sleeve will undoubtedly be Mexican striker Enrique Esqueda and Costa Rican defender Johnny Acosta. While Acosta, who played all three group matches for his country in this year’s FIFA World Cup Finals, will be only the second footballer in India currently to have played in a senior FIFA World Cup, Mexican Esqueda’s credentials seem even more impressive.

The striker has not only played in the Copa America for his country but has the distinction of scoring goals against clubs like Real Madrid, AC Milan and Manchester City in competitive international club football. For QEB to fulfill their I-League dreams they will surely have to score many goals and Esqueda might just be the answer to that problem

QEB’s coach Alejandro Garcia also exuded confidence in the pre-match presser saying, “We are very confident before tomorrow’s match. We know that we can win the match. This is a very difficult opening but we hope to get three points.” He also disclosed that Syrian midfield general Mahmoud Al-Amna had not travelled to Imphal due to personal reasons.

Match two of the season between Neroca FC & Quess East Bengal is scheduled at 2 PM on October 27, 2018 and it will be telecast LIVE & Exclusive on Star Sports 3, HotStar and Jio TV.

A total of 110 matches are scheduled in the 12th Hero I-League edition, featuring a total of 11 teams representing 10 states across the country.