Kozhikode All Set For The Gokulam – Mohun Bagan Clash

The maverick Bino George coached Gokulam have had the better of the exchanges in the two head to head encounters between the two sides so far, with a win and a draw respectively and the hosts would like to take that confidence into Saturday’s clash.

Mohun Bagan, on the other hand, will be looking to erase memories of a painful final day in last year’s edition, when needing a win desperately to give themselves a shot at the title, they were held to a draw in front of desolate home fans. 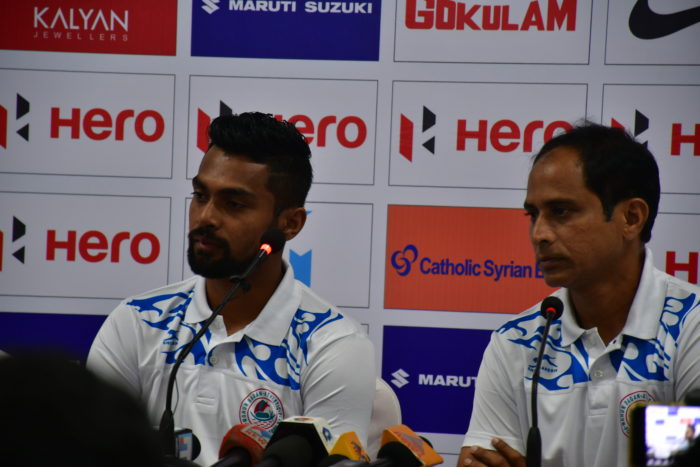 Both Gokulam and Mohun Bagan have a modicum of continuity on the coaching front, with both Bino and Mohun Bagan’s Sankarlal Chakraborty now in the saddle for a considerable length of time.

Gokulam, in spite of finishing seventh last year, which was also their debut year, had a brilliant run of form in the middle stages. The catalyst behind the six wins that they notched up during that run, former Ugandan international striker Henry Kisekka, will incidentally spearhead their opponents attack come Saturday.

Mohun Bagan finished third in the last edition and will also be running on the back of a morale-boosting Calcutta Football League title win, after a gap of eight years.

The home side, though, have accumulated good Indian talents in the likes of Baoraingdao Bodo, the Hero I-League’s youngest ever goalscorer, in the attacking third and a local lad Arjun Jayaraj leading the midfield. Among their foreign recruits, Ghanian Daniel Addo has been solid in defence and Ugandan Mudde Mussa will also play the holding midfield role with aplomb. Arnab Das Sharma and Shibinraj, both solid goalkeepers, will mostly be protecting the Gokulam goal between them.

Coach Bino George appeared in his usual upbeat self on the eve of the match saying, “My target last year was to play Super Cup and I am happy we reached it. This year our target is top 3. Mohun Bagan is a strong team but we have home advantage, and we will fight strong and not give them an easy game.”

Midfielder and team vice-captain Md. Rashid also exuded confidence, “We are confident about our game and we would like to be strong in the field tomorrow. We have played them last season and they are a strong team this time around. But we are prepared for the game tomorrow.”

Coach Sankarlal reflected the myriad of Mariners’ sentiment before the game, “Winning is the only option for us. We would only be playing to bring the trophy home and that’s the only agenda for us.”

To their credit, they have managed to hold on to their top goal scorer from last year, as also of the last two Hero I-League editions, Cameroonian Dipanda Dicka, and will feel bolstered by the return of the winger, Haitian Sony Norde although he is yet to gain the match fitness. But with Kisseka in their ranks, the attack does look menacing and if the antecedents of Egyptian Omar Elhussieny is anything to go by, Gokulam’s defence is sure to be busy throughout the 90 minutes.

Homegrown talent Arijit Bagui and Nigerian Eze Kingsley have also been outstanding in defence. In the midfield, the calm composure of Japanese Yuta Kinowaki should act as a perfect foil to the talent and enterprise of youngsters Azharuddin Mallick, Pintu Mahanta, Sourav Das and William Lalnunfela, who impressed so much with Aizawl FC last year. Shilton Paul in goal also gives fans a sense of assured predictability.

Match three of the season is scheduled at 5 PM on October 27, 2018 and it will be telecast LIVE & Exclusive on Star Sports 3, HotStar and Jio TV.