by Sachim Karekar
in Uncategorized
0

NEW DELHI, 17th September 2018 : Seven countries are set to kick-off the inaugural edition of the SAFF U-18 Championship for Women which gets underway later this month in Bhutan. 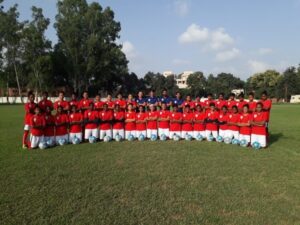 India have been clubbed in Group A, along with neighbours Sri Lanka and Maldives. The Indian girls kick-off their campaign against Maldives on September 28 before facing Sri Lanka on October 2 — the birth anniversary of the Father of the Nation and national hero Mahatma Gandhi.

The tournament follows a round robin format where all the teams in each group play each other once. The top two teams get to qualify for the semi-finals (October 5), where the winner of Group A faces the runners-up of Group B, and vice versa.

The final of the tournament is set to be held on Sunday, October 7.

At the senior level, the Indian women have been the most successful team in the SAFF Championships, winning all four editions of the tournament that have been held till date. The Senior SAFF Women’s Championship are scheduled to be held later in December 2018.

October 5: Semi-final 1 (Group A Winner vs Group B Runners-up).

October 5: Semi-final 2 (Group B Winner vs Group A Runners-up).