NEW DELHI, SEPTEMBER 28th, 2018 :    The India U-18 girls kicked off their SAFF U-18 Championship campaign with a bang in Thimphu on Friday, September 28, as they routed hosts Bhutan 4-0 to take a healthy lead at the top of Group A. 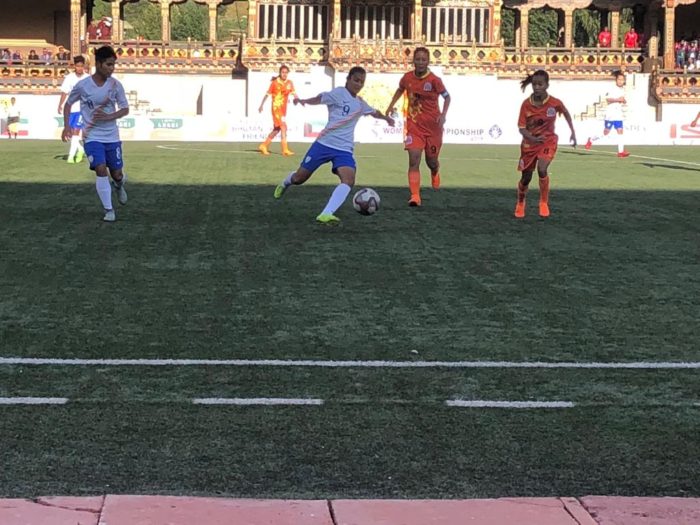 Devneta Roy was the star of the show as she netted two goals and created several other chances for the young eves. This result means that newly appointed women’s U-18 side head coach Alex Ambrose started off his tenure with the national side with an emphatic win.

The match started off with a great tempo as both the sides looked to get the early advantage. India got a host of corners in the first quarter on an hour, but the Bhutan defence managed to thwart them in the early exchanges.

In the 22nd minute, Ashem Devi was put through on goal in a one-on-one situation but Bhutan keeper Ngawang Chozong did well to parry the shot. Soumya latched on to the rebound and pulled the trigger but her shot whistled past the post.

Minutes later, Manisha created some space for herself inside the box, after receiving a short corner, but sent her shot into the side-netting.

It was after the half-hour mark that India keeper Shaugurumayum Monika Devi was really called into action when Bhutan sent a corner into a cluster of players close to the near post. Monika came off her line to punch it away but the ball landed at the feet of an onrushing Bhutan attacker. However, a goal-line scuffle ensued, after which, the ball was eventually cleared.

Devneta Roy had a golden chance to score on the 33rd minute when she was played through inside the opposition area. Seeing that the goalkeeper was rushing towards her, she tried to chip the Bhutan custodian on the bounce. However, her effort landed on top of the cross-bar and fizzled out of play.

The India forward got another chance minutes later, and this times, she made it count. Taking it on her left foot, she placed the ball into the bottom corner, to put the young eves into the lead.

That goal seemed to have galvanised the Indians and they came out charging after the half-time break. It took the Indian girls only five minutes to score as Devneta netted her second goal of the match as she took a bouncing ball on the edge of the area, wrong-footed a Bhutan defender with a turn, and rifled her volley into the back of the net.

While the first goal gave impetus to the Indian girls, this second one seemed to have deflated the Bhutandefence. From this point on, the match turned into a bit of a rout.

In the 64th minute, Manisha penetrated the Bhutan box from the right side, dodged past a defender and pulled the trigger from a tight angle. Her low shot deceived the Bhutan keeper, as the ball slipped between her legs and rolled into the goal to make it 3-0 in India’s favour.

Just a couple of minutes later, Ashem got in on the act, from a dead-ball situation, that was around 30 yards away from the Bhutan goal. Her well-placed shot had power, placement, and swerve to deceive the Bhutan keeper, and bulge the back of the net.

Having gone 4-0 up, the girls toned down the tempo of the game, perhaps saving up their energy for the next game against Maldives on October 2.