11
SHARES
65
VIEWS
Share on FacebookShare on Twitter
Chennai, October 18: NorthEast United FC upstaged reigning Hero Indian Super League champions Chennaiyin FC in a seven-goal spectacle at the Jawaharlal Nehru Stadium, Chennai, on Thursday.
A terrific hat-trick from star striker Bartholomew Ogbeche (29’, 37’, 39’), the second-fastest in the ISL, had pulled the Highlanders level in the first-half after a Rowllin Borges own goal (4’) and Thoi Singh brace (15’, 32’) had propped Chennaiyin FC up. Borges would then make amends for his mistake by netting the match-winner early in the second half. 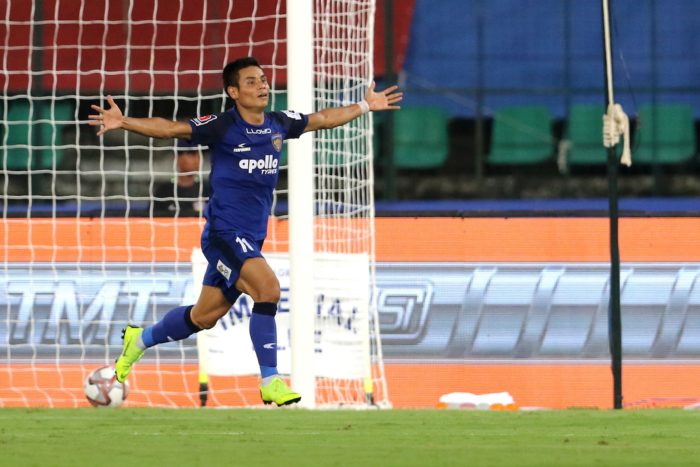 Without a win in two games, the hosts started the match with urgency and were rewarded with an early goal after they forced a corner in the fourth minute. Issac Vanmalsawma whipped a devilish delivery in and Borges inadvertently headed it into his own net from inside the six-yard box.
Though NorthEast started dominating possession, it was Chennaiyin who struck again. In the 15th minute, Jerry Lalrinzuala spotted Issac’s run down the left and sent in a wonderful through-ball for the winger to latch on to. Issac surged forward and squared the ball for Thoi who finished the move.
The Highlanders pulled a goal back minutes before the half an hour mark after the energetic Federico Gallego managed to get a shot on target. Goalkeeper Karanjit SIngh, however, could not hold on to it and Ogbeche capitalised on the offering before slotting a finish into the far corner.
Chennaiyin, though, restored their two-goal advantage almost immediately. Raphael Augusto wriggled free of his markers down the left wing and got to the touchline. His square-ball was bundled in by Thoi at the near post.
The see-saw nature of the game continued but it was NorthEast who would take the game by the scruff of its neck. Ogbeche came into his own and struck twice to pull the Highlanders level.
First, he outjumped Francisco Fernandes to meet Borges’ cross and steered it home. Minutes later, he met Gallego’s wonderful through ball and rounded the keeper before rolling the ball into the net. 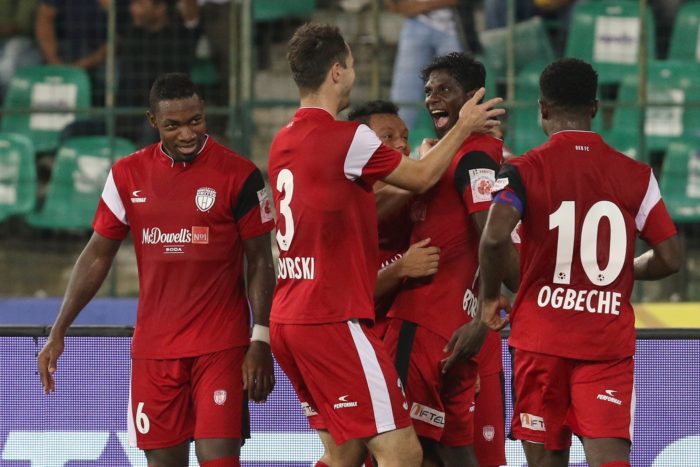 NorthEast continued their ascendancy after the break and soon went into the lead. Gallego found Reagan Singh down the right wing. His cross was blocked and Borges latched on to the loose ball on the edge of the area and swept a brilliant finish into the bottom corner.
Chennaiyin pressed hard for a way back into the game but NorthEast showed composure to hold on to their advantage.
Chennaiyin coach John Gregory threw on Jeje Lalpekhlua in a bid to conjure up an equaliser. He almost got on the end of a header from Andrea Orlandi in added time but just could not steer it in as Eelco Schattorie’s team held on to register a famous victory.
Share11TweetShare