Sunil Chhetri of Bengaluru FC during the practise session before the start of the match 29 of the Hero Indian Super League 2018 ( ISL ) between Kerala Blasters FC and Bengaluru FC held at Jawaharlal Nehru Stadium, Kochi, India on the 5th November 2018 Photo by: Vipin Pawar /SPORTZPICS for ISL

10
SHARES
74
VIEWS
Share on FacebookShare on Twitter
Goa, November 21: FC Goa will take on last season’s runner-up Bengaluru FC in what promises to be an enthralling affair at the Jawaharlal Nehru Stadium in Goa on Thursday.
The Gaurs lead the Hero Indian Super League (ISL) standings with 16 points from seven games and can further consolidate their position with a win. However, should they suffer a loss at the hands of Bengaluru FC, the club from the south will move to the summit.
The match will also see two supreme attacks go up against each other. While Ferran Corominas and Edu Bedia lead the charge for Goa, Miku and Sunil Chhetri will be Bengaluru’s flag bearers.
In Hugo Boumous and Edu Bedia, Goa have two most creative players who have the ability to unlock stubborn defences, and then there is Corominas who gives finishing touches to moves like nobody else.
“I think we are facing the best team in the league. I believe tomorrow’s match is a big challenge for us. I think tomorrow’s match will determine what is going to happen in this league. But I think it is a good chance for us to get three points at home and take the advantage,” said FC Goa chief coach Sergio Lobera. 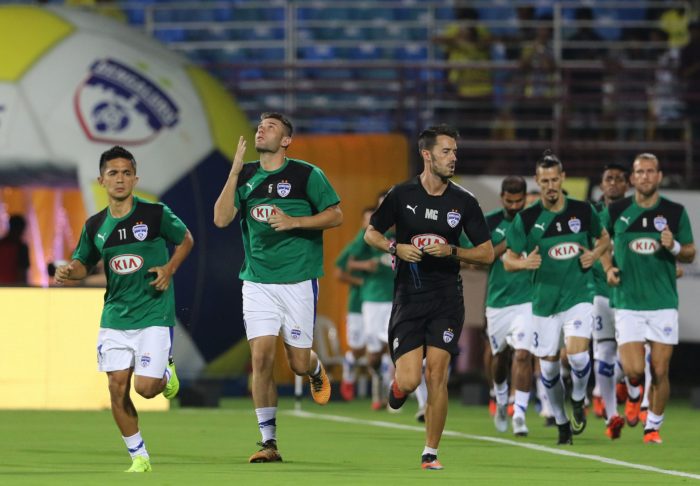 Bengaluru have been boosted by the news that Sunil Chhetri is fit to feature in the game after missing the recent international break with an injury. While Chhetri has four goals to his name, all eyes will be on Miku as well. The Venezuelan striker has been in top form and Bengaluru FC have only dropped points against Jamshedpur FC, a game in which Miku neither scored nor provided an assist.
“Sunil has trained in the last two training sessions and as far as we are concerned he is fine now and he can participate in tomorrow’s match,” said Bengaluru coach Carles Cuadrat.
It must be noted that both Chhetri and Coro are closing in on the ISL’s all-time topscorer record. While Iain Hume leads the charts with 28 goals, Chhetri has 25 strikes and Coro has 26 goals to their names.
“We can say that FC Goa are playing very good football and are scoring a lot of goals so I think it can be a very nice game because our mentality is also to play nice football and score goals. I hope the match becomes a nice show for all the fans,” said Cuadrat.
Bengaluru are one of the only two unbeaten sides in the competition. In what will be their fourth away game of the season, it must be noted that the Blues have won their previous three. Sergio Lobera went as far as to label them the best team in the league.
The last time the two sides met in Goa, the hosts triumphed in a seven-goal thriller. Will it be another carnival in Goa or can Bengaluru continue their unbeaten run?
Share10TweetShare