Bengaluru, September 20, 2018: Four golfers from Bengaluru and one from Hyderabad registered wins in their respective handicap categories, as the 10thSara Futura Karnataka Golf Festival (KGF), south India’s largest participative golf tournament, got underway at the Karnataka Golf Association (KGA) course here on Thursday. Bengaluru’s Chetan Yallapurkar (42 pts) in the 21-24 category, K.S. Venkat (35 pts) in the 16-20 category, Riad Ahmad Mahmood (33 pts) in the 6-10 category and David D’Souza (35 pts) in the 0-5 category along with Hyderabad’s Madhav Kota (35 pts) in the 11-15 category, have now given themselves a chance to be among the top five winners of the 10thSara Futura KGF, which is supported by Karnataka Tourism.

Over 500 golfers have registered to participate 10thSara Futura KGF. Among them are more than 100 outstation golfers from 16 cities and towns of India. Former sprint queen, Ashwini Nachappa(picture attached) was among those who played at the KGA on the opening day of the 10thSara Futura KGF. 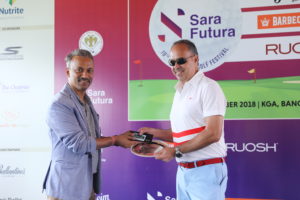 The top score among all winners of the five handicap categories across the four days of the tournament will qualify to represent India at the World Amateur Golfers Championship (WAGC), one of the world’s largest amateur golf championships, in Johor, Malaysia, in end October. In fact, one of the winners today, David D’Souza, a popular city golfer who also won the Overall Best Gross score prize on the day, is attempting to make it to the World Finals for a second time, having already represented India at the WAGC once earlier.

Day two on Friday, will have the added attraction of Kshitij Naved Kauland Harimohan Singh, young golfers who represented India at the recently concluded Asian Games, playing a round each at the 10thSara Futura KGF after which they will also be felicitated for representing India.

10thSara Futura KGF: Other prizes won by golfers on day one