0
SHARES
111
VIEWS
Share on FacebookShare on Twitter
Kochi, November 11: FC Goa opened a three point lead at the top of the Hero Indian Super League (ISL) 2018 table after they eased past Kerala Blasters 3-1 at the Jawaharlal Nehru Stadium, Kochi, on Sunday.
A Ferran Corominas double and a strike by Manvir Singh was enough for Goa to pick yet another three points as they are now the first team this season to score over 20 goals. Kerala pulled one back late in the game through Nikola Krcmarevic. 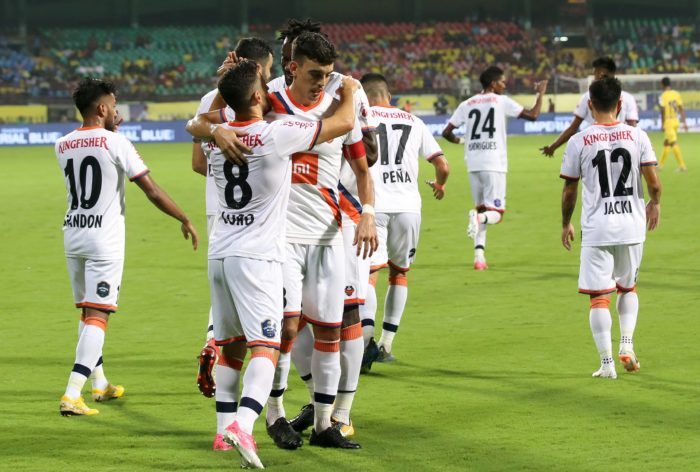 David James named an all-Indian defence for the very first time with Anas Edathodika making his first start of the season. Meanwhile, Sergio Lobera opted to rest Hugo Boumous with Brandon Fernandes earning a spot in his line-up after a goal in the previous game. 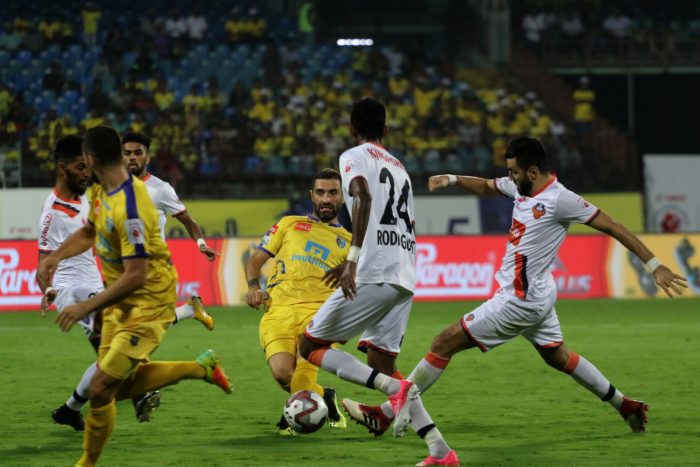 It took 11 minutes for the visitors to take the lead. Coro scored his seventh goal as he got on the end of a Ahmed Jahouh cross to head home as the Kerala defence was caught napping.
Jahouh, Edu Bedia and Lenny Rodrigues controlled the proceedings as Kerala struggled to create a chance of note.
Goa should have doubled their lead just before the half-time when Jahouh’s long punt found Carlos Pena who got on the end of it. Naveen Kumar came off his line and Mohammed Rakip closed the Goa left-back down and his final effort under pressure went inches wide.
However, the next minute, Coro scored his second of the evening as he delicately placed the ball beyond the reach of the goalkeeper after an excellent run.
After the break, Seminlen Doungel came close to pulling one back from a set-piece as his free-kick was parried way by Mohammad Nawaz by diving to his right. 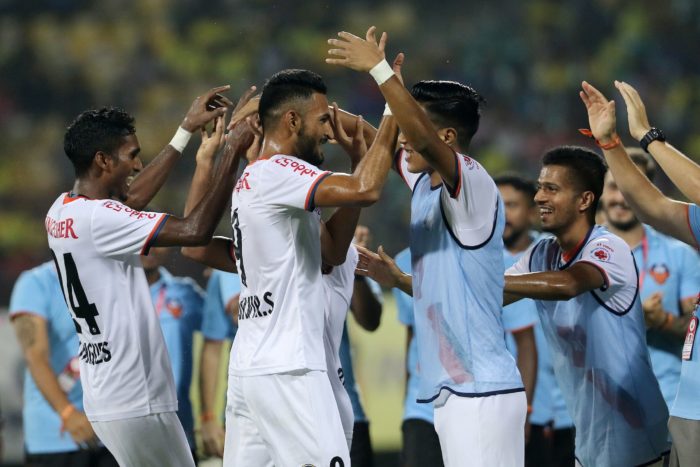 Just after the hour mark, Naveen’s poor clearance was picked up by Brandon who crossed it for Coro in the box. The striker’s first attempt was blocked by a combination of Lalruattara and Anas. Off the rebound, Naveen pulled off a terrific save to deny Coro his second hat-trick of the season.
Naveen once again was called into action as he just about managed to keep Hugo Boumous’ effort by conceding a corner. From the ensuing set-piece, Goa made it 3-0 in the 66th minute through substitute Manvir Singh as he put his height to good use from a Brandon corner. 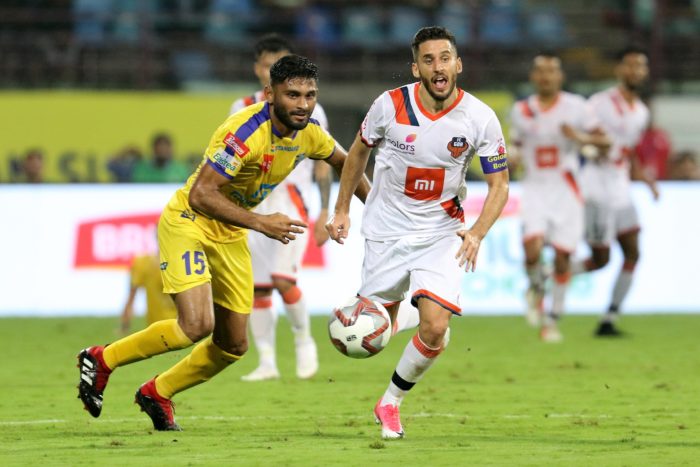 At the other end, Mohammed Ali was guilty of giving the ball away and Doungel’s right footed shot was parried away by Nawaz. CK Vineeth, who was dropped from the first team, could have had his name on the score-sheet but his shot was cleared off the line by Mourtada Fall. 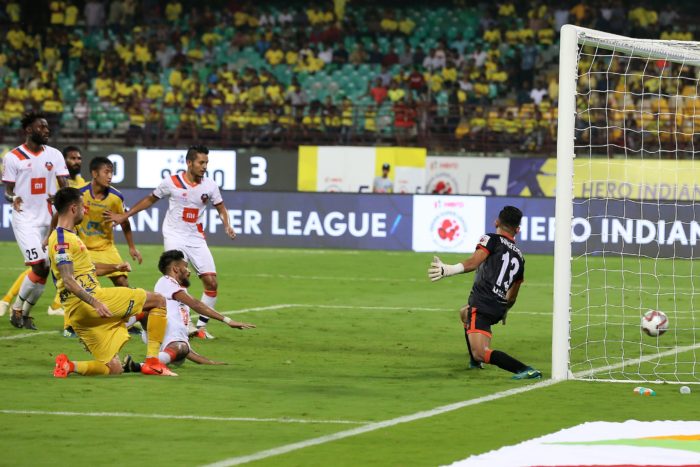 Against the run of play, Nikola Krcmarevic got on the end of a cross by Sandesh Jhingan in added time as he pulled one back for his side.
Kerala’s poor run of form continued as they have gone six games without a win and suffered their second defeat on the trot.
ShareTweetShare