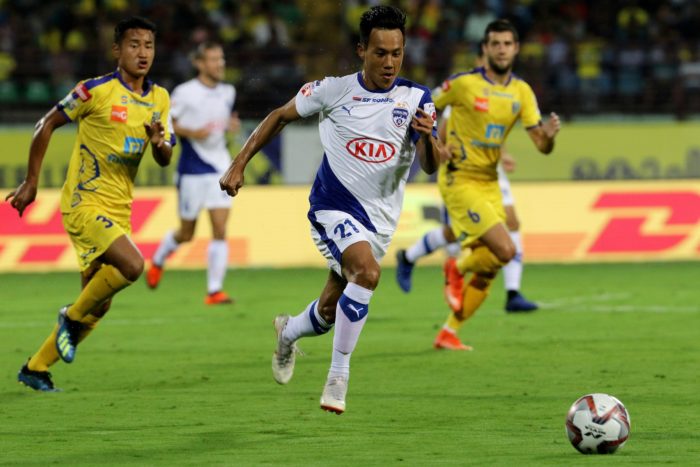 Captain Sunil Chhetri opened the scoring in the 17th minute with a neat finish past Naveen Kumar. Kerala equalised with a well-converted spot-kick by Slavisa Stojanovic in the 30th minute but an own goal by Nikola Krcmarevic in the 80th minute settled the tie in favour of the visitors.
The win means Bengaluru FC have now won all three of their away matches on the trot to maintain a perfect record.
The home side could have earned an early lead had CK Vineeth kept his shot on target from Prasanth Karuthadathkuni’s low cross from the right. The forward sneaked into the box from the right but sent his effort over the bar.
Erik Paartalu had the goal at his mercy at the other end minutes later. Dimas Delgado’s delivery from a free-kick was headed by Sandesh Jhingan into the feet of the Australian whose effort from the near post was cleared by Lalruatthara who was positioned near the goal line.
The Blues made a breakthrough in the 17th minute through a neat finish by Chhetri. Miku’s terrific through-ball behind the Kerala defence allowed Chhetri to race into the box and put the ball into the net.
Blasters were back in the contest at the half an hour mark. Sahal Samad collected Cyril Kali’s throw-in from the right flank but was fouled inside the box by Nishu Kumar before he could get his shot away. The referee pointed at the spot and Stojanovic stepped up to score an emphatic spot-kick.
The hosts, boosted by the equaliser, could have taken the lead before half-time. Nikola Krcmarevic’s excellent cross-field diagonal reached Prasanth on the right flank who found Doungel inside the box and the Indian striker forced Gurpreet to a good reflex save.
After the break, Erik Paartalu’s long ball into the box had the Kerala defence on alert. Harmanjot Khabra headed the ball back to Chhetri who lobbed it forward for Miku but the Venezuelan’s deflected effort went wide.
Another long punt up the field, this time by goalkeeper Gurpreet Singh, allowed Miku to sneak into the box past Lakic-Pesic. The Venezuelan found Udanta Singh in the centre but the winger’s powerful shot took a deflection and was parried away by Naveen.
In the final quarter of the game, Vineeth threatened again when he beat the offside trap to latch onto Prasanth’s delightful through-ball but his shot past Gurpreet rolled wide of goal.
Bengaluru broke the Kerala hearts with nine minutes to go. Xisco released Miku into the box and the latter’s return was sent goalwards by the Spaniard. Naveen’s save off the substitute’s shot hit Krcmarevic before rolling into the net.
Kerala hardly created any chance of note thereafter as their unbeaten start to the season came to an end.
Tags: BengaluruBengaluru FCBFCHero ISLindian super leagueISLKBFCKerala BlastersKerala Blasters FCManjapaddawest block blues
0Likes
Leave a comment