Bengaluru, September 23, 2018: Two golfers from Bengaluru and one each from Delhi, Mumbai and Hyderabad, earned the rights to represent the tricolor at the World Amateur Golfers Championship (WAGC) in Johor Baru, Malaysia, in end October, as the 10thSara Futura Karnataka Golf Festival (KGF) concluded at the Karnataka Golf Association (KGA) course on Sunday. The annual marquee event, celebrating a decade of success this year, is supported by Karnataka tourism and is South India’s largest participative amateur golf championship. 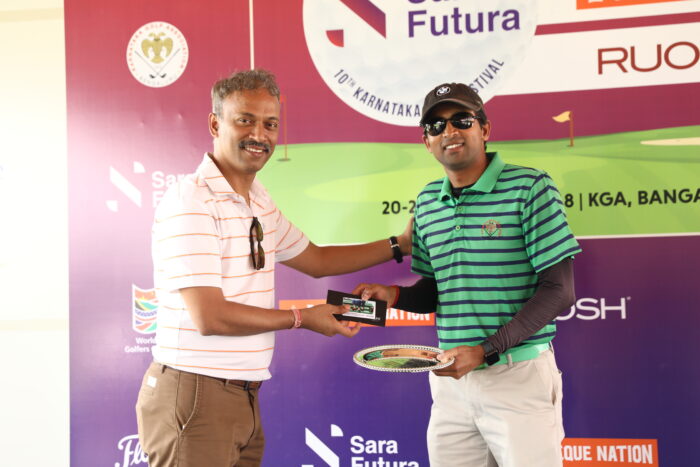 Over 500 golfers participated at the KGF this year with more than 100 outstation golfers from 16 cities and towns of India. Among the star names that participated in the tournament include former sprint queen Ashwini Nachappa, India cricketer Karun Nair, former India cricketers Ajit Agarkar, Subramaniam Badrinath and Sujith Somasunder, television actor Akul Balaji and popular sports commentator Charu Sharma. The other highlight of the tournament was the overwhelming response to the golf clinic conducted by woman professional golfers Neha Tripathi and Anisha Padukone.

However only Mumbaikar Haresh Patel, Nandan Hebliker and Delhi’s Hritik Gandhi made the cut to represent India at the Malaysia WAGC as they were the best net scores in their handicaps over four days. Hyderabad’s Madhav Kota who had won in the 11-15 category on the opening day and Bengaluru’s Milesh Jumburao who had won the 0-5 category on Saturday were the others who qualified for the WAGC.