ATK Under Pressure To Get Going

ATK Under Pressure To Get Going

Kolkata, October 3: Two-time champions ATK will be desperate for three points as they come face to face with NorthEast United FC in their Hero Indian Super League 2018-19 battle at the Vivekananda Yuba Bharati Krirangan, Kolkata, on Thursday.

The hosts suffered a disappointing defeat in their opening game against Kerala Blasters FC. One of the stronger teams at least on paper, ATK were expected to set the pace in this edition of ISL but have been pegged back early in the league.

The new-look ATK side showed signs of a lack of cohesion, an indication that the players are getting used to a new system under the tutelage of a new coach.

“The style we play is a reflection of the individuals we have in the team. We were six weeks away from the start of the league when we got along in the pre-season. We have had some injuries.  The team is still forming. I hope we gel quickly but it will take time. Therefore, I once again say that teams with continuity have an advantage in ISL,” said ATK coach Steve Coppell, who took over the team only this season after spells at Kerala Blasters and Jamshedpur FC, last season. 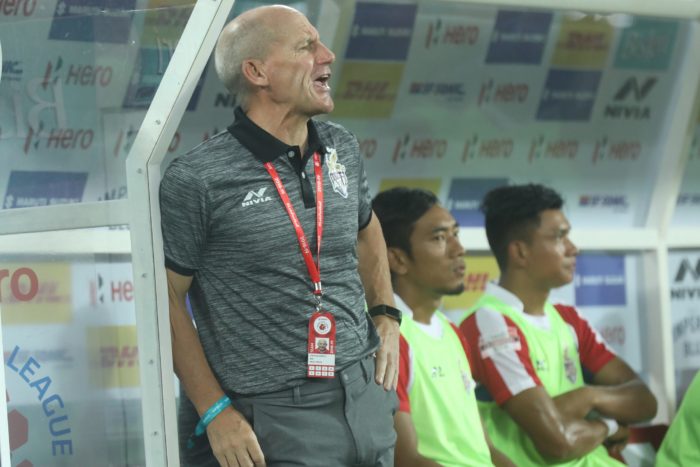 Coppell’s teams in ISL have always started slowly and gradually gained tempo over a few matches into a new season. At both of his previous clubs, his first win of the season came after the first three games and ATK won’t be concerned yet.

“We gave the ball away easily the other night. Moreover, it is so hot and when you don’t have the ball, it’s more of an effort. I hope it will be better against NorthEast United. We just need to control the ball more which will give us more potential to go forward and attack,” he added.

Going into their second match of the season, NorthEast United have problems in defence that need to be addressed. Goalkeeper TP Rehenesh looked nervy in between the sticks and the backline was disorganized against FC Goa when they drew 2-2.

“The second game will not be the same. If you have three-four games, then it would have been easy. Of course, I have looked at their (ATK) last game. I have noted points on where we could take advantage. But it will be a difficult match,” said coach Eelco Schattorie.

Schattorie showed that NorthEast were not willing to adopt a defensive tactic and let the opposition have the ball. The Highlanders’ star striker Bartholomew Ogbeche will be up against a strong centre-back pairing in John Johnson and Gerson, possibly leading to an invigorating battle.

“We have had only four days rest after the previous game. The humidity makes it more difficult to recover. It is a challenge for us. We need to be more organised. Hopefully, we can pull off a good result,” said the Dutchman.