The ongoing season of the Hero Indian Super League (ISL) is past its half-way mark and we already have teams who have staked their claims for a spot in the play-offs.

Bengaluru FC have blazed their way to the top of the table while NorthEast United have caught everybody’s eye with their attack-minded football. Then you have the uber-attacking FC Goa who have been the best entertaining team and are placed fourth.

But sitting second on the table, having flown under the radar a bit, is Mumbai City FC. The Islanders have 20 points from 10 games and have firmly put themselves in the race for the play-offs.

However, the situation seemed grim for them four games into the season. They had just four points in their kitty at that stage and had just been handed a 5-0 spanking by FC Goa which prompted the coach Jorge Costa to question his players’ attitude and motivation.

“In the second half against FC Goa, we gave up. That is why I am sad. Not because we lost 5-0 but because in the last 15 minutes we saw a team waiting for the game to finish. They were not running, not focused on the game. What happened in the last 15-20 minutes, I was ashamed because they gave up. As a professional football player, you cannot give up,” he said.

His words jolted Mumbai City’s stars into action and the team has put in resolute performances ever since. In the subsequent six games, Mumbai are unbeaten and have picked 16 points with five wins and a draw. Importantly, this is the club’s best ever unbeaten streak in the ISL.

Pointedly, they were not cavalier performances from Costa’s side. Instead, the team mirrored their coach’s fighting personality and ground out the results, scoring 10 goals and conceding just the two. Even the two goals conceded came in one game, against the Delhi Dynamos which they won 4-2. They kept clean sheets in the other five games, taking the season’s tally up to six.

Their aggression and tenacity has come to the fore during this run. Mumbai City’s intent and physical dominance has unsettled their opponents.

“I don’t think we were extra hard in our tackles. This is football, not ballet. You need to be aggressive and I’m fortunate that my team is,” Costa said.

Key to his run has been the form of their foreign recruits. Moudou Sougou and Arnold Issoko have regularly come up with match-defining contributions but it is Paulo Machado who epitomises Mumbai City’s improvement. After an average start to his ISL stint, Machado has come of his own, running the show from midfield and dictating proceedings.

Also, an improved performance from his defence, which is helmed by Lucian Goian and ably supported by the likes of Subhasish Bose and Joyner Lourenco, has gladdened Costa who prides himself on his team’s organisation.

They have certainly turned a corner after their horror show against FC Goa, showing grit and determination in the process. 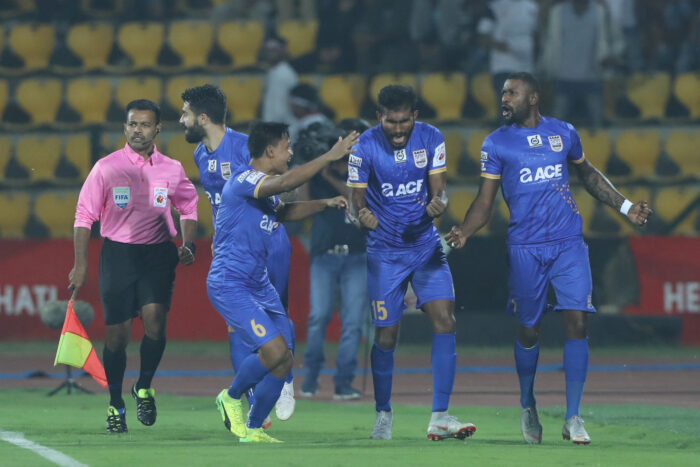 These are qualities which will serve the team well in crunch fixtures as the season rolls along. If they show the consistency they have displayed in the last six games in the coming fixtures as well, a play-off berth is an extremely realistic proposition for them.

From there on, it is anybody’s game. Mumbai City is definitely shaping out as the team to look out for.