After ‘Shame’ In Goa, Mumbai Look To Start Afresh

Mumbai, October 26: Mumbai City FC will want to forget their loss against FC Goa in a hurry. Coached by Jorge Costa, Mumbai lost 0-5 early this week and will now seek to redeem themselves with a positive result against Delhi Dynamos at the Mumbai Football Arena in Mumbai on Saturday.
Mumbai in fact started well against FC Goa and had chances to turn the match on its head. However, they were woeful in front of goal and the hosts capitalised to inflict a painful defeat. That defeat hurt Costa a lot, not just the result but also the manner in which they surrendered towards the end. 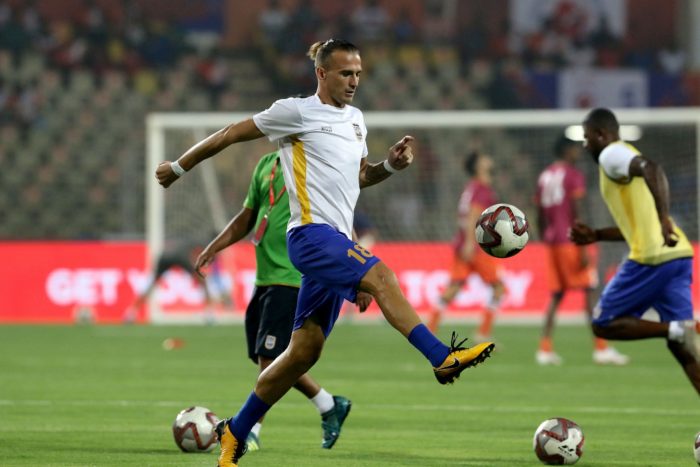 “The first half (against Goa) was very good. The players did almost everything that I asked. In the second half, it was not bad in the first 20 minutes. Then, we gave up. That is why I am sad. Not because we lost 5-0 but because in the last 15 minutes we saw a team waiting for the game to finish. They were not running, not focused on the game. They gave up,” said Costa.
The Portuguese coach said he wants his team to fight start from start to finish, whatever the scoreline.
“We must respect first our job. Second, we must respect the work. Third, we must also respect the fans and we cannot give up. What happened in the last 15-20 minutes, I was ashamed because they gave up. As a professional football player, you cannot give up,” he said.
One can expect the Portuguese tactician to ring in the changes as he seeks to turn around the glum mood in the camp. Captain Lucian Goian will have to take ownership and ensure the leaks in the defence are plugged and spirits in the dressing room are raised. They will have to fight without goalkeeper Amrinder Singh who was injured against Goa.
Delhi Dynamos have their own woes to address as they seek their first win of the campaign. Delhi have drawn three games while losing one so far and cannot take Mumbai City for granted.
“That loss was not on Mumbai City. It totally was on FC Goa. All the goals were good. Mumbai City got chances but they did not convert. Tomorrow is a new match, a new day. I think that result will not affect the performance of Mumbai City,” said Delhi’s assistant coach Mridul Banerjee.
Delhi have largely flattered to deceive in their games. They have created chances in most of their games but abysmal finishing have come back to bite them. The three goals in four games does not reflect the number of chances they have had.
“We are playing very well and we have created so many goalscoring chances but we have failed to convert. We are working on that though and I think within one or two matches, we will sort it out,” said Banerjee.
Tags: FC GoaFCGHero ISLindian super leagueISLMCFCmumbai city fc
0Likes
Leave a comment