25th June 1983: The Day That Changed Fortunes Of Indian Cricket

West Indies were the hot favourites to lift the trophy for the 3rd consecutive time & create a unique record before the start of the tournament in 1983.

The title holders faced their first ever defeat in the history of the tournament in the group match against Kapil Dev led side Indian team at Old Trafford, Manchester. Other teams being Zimbabwe & Australia in the group failed to qualify for the semifinals managing one and two wins respectively in their group stages. 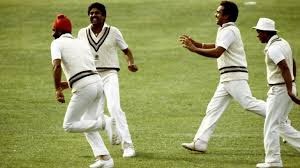 After their win against the two-time World Cup Champions, the morale of the Kapil Dev-led Indian side was boosted as they defeated the hosts England in the semifinals at Old Trafford. Defeating the home side at their backyard in the biggest tournament of cricket was itself a huge victory for the Indian team.

On 25th June 1983 at the historic ground of Lords, West Indies faced the pressure of defending their title against the underdogs India. Westindies seemed confident of their 3rd WC title as they had previously defeated India in the group stages. The odds were against India in the high-intensity finals.

In the finals, India lost the toss and was asked to face the deadly bowling attack probably from the World’s best bowling attack. India managed to put a meagre total of 183 on the scorecard which was a cakewalk for the WI team having likes of Viv Richards & Clive Lloyds.

Madan Lal, Mohinder Amarnath, Roger Binny alongside captain Kapil Dev demonstrated a brilliant all-round performance in the other department after the batting lineup had failed miserably on the night of finals.

India cleaned up the WI innings for 140 showcasing that the game of cricket doesn’t rely only on batting partnerships but deadly bowling can win important matches too.

Kapil Dev took the lone wicket of Andy Roberts in form of LBW which was then followed by the famous wicket of Michael Holding by Mohinder Amarnath as India were crowned the World Cup champions for the first time.

The visuals of the fans running into the ground and the players scampering to safety being cheered are one that will forever stay in Indian fans’ minds.