The Asian minnows –  Afghanistan’s rise in competitive international cricket has been phenomenal. They have gradually progressed through different tournaments in the limited over format to make a cut to the biggest platform in the game involving bat and ball- ICC Cricket World Cup.

The squad enters into the competition as the underdogs- the winning shot through their grit, determination, hard work & zeal against their Asian rivals – Pakistan, in their 1st warm-up encounter indicates that there is much more apart from memories on their wish-list to take back home post the competition in England.

The boys will wear two different sets of jerseys in the competitions depending upon their opposition as India & SL have similar jerseys with blue shades. Led by Gulbadin Naib, the team boasts upon its spin bowling contingent comprising the trio of Rashid Khan, Mujeeb Ur Rahman and Mohammed Nabi as their twirlers stand the ability to play a destructive role in the spin-friendly pitches and English conditions from both the ends of wicket.

Naib needs to prove his mettle of leading the squad despite being the comparatively less-experienced player than Asghar Afghan and few other senior members of the squad. However, with due support of seniors in the current lot & captaining the U-19 Afghan squad himself, the 17-year experience on the CV will count when Gulbadin will take the charge of his troops as they begin the campaign of the CWC 2019 in England. 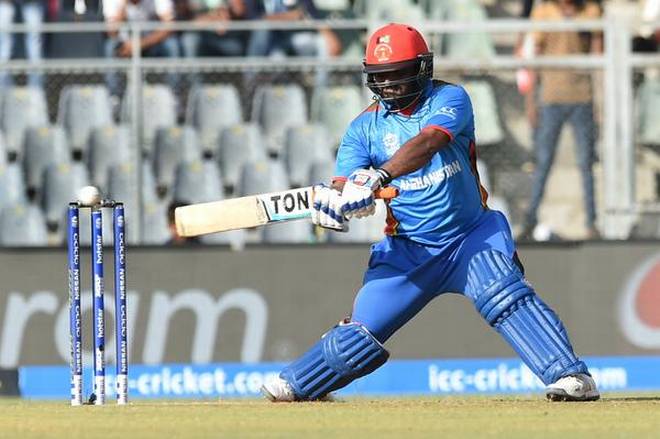 The WK-batsman is expected to lead the Afghan side right from the start, where batting is concerned. The aggressive approach of the right-handed opener needs to sync with others for fruitful results.

Known by the nickname “Afghanistani Gayle”- the sixth batsmen in the world to achieve the rare feat of hitting six sixes in an over, the left-handed batsmen promises to accelerate the run-rate with the help of his batting prowess. His 162 off 62 balls in T20I against Ireland earlier this year powered AFG to a world-record T20 total of 278/3. However, realizing the importance of his wicket, the individual is expected to explode looking at the conditions and oppositions for long-term sustainability.

Good at staying at the crease for long, Shahidi brings the potential and patience along with him to make the squad as the “dark horses” in the competition.

Afghan All-rounder and lower-middle-order-batsmen add depth to the batting for the squad. Standing the ability to capitalize the lost momentum during the chase or helping the scorecard to reach above par, Shenwari aims to prove himself as a match-winner.

Established No 3 and new Test skipper, Shah has established himself as a versatile middle-order batsman for Afghanistan. Falling two runs short of becoming his country’s first Test centurion, the right-handed batsmen gives a cushion through his consistency and promising performance.

With the board removing him from the post of the captaincy of the national squad from all 3 formats, two months before the World Cup, he is expected to play an instrumental role for the success of his team.

The former Afghan skipper and all-rounder will certainly bring his experience of featuring in Big Bash League (BBL) for Melbourne Renegades. His multiple bowling variations & heavy contributions with the bat will certainly increase the odds for his nation as the tournament will progress ahead.Gulbadin Naib

The confidence showcased by the selectors on the youngster to lead Afghanistan in the major competition in England, itself speaks of the capability of Naib. Bringing the best out of his boys and leading from the front will be on the radar of the Afghani skipper.

The leg-spinner in the squad seems to have made progress more than anyone else and has constantly seen moving up the ladder in ODI rankings after having topped the T20I for his national side. The young and latest cricketing sensation will be a key weapon in England.

The Afghan side might be considered as minnows by many, but expect them to give a tough fight to each and every team out there in England.