Puneri Paltan and Jaipur Pink Panthers played out a thrilling 30-30 tie in Vivo Pro Kabaddi Season 6. Jaipur Pink Panthers would rue several missed opportunities as they were in the lead for majority of the match. Puneri Paltan put up a strong show in the second half but missed a chance in the last minute to win the match. Deepak Niwas Hooda was the star man for Jaipur as he scored 12 points. Girish Ernak was the defender of the match as he scored six tackle points for Puneri Paltan.

GB More and Anup Kumar scored a raid point each as Jaipur Pink Panthers led 2-0 in the first minute. Puneri Paltan forced a super tackle in the fourth minute as they trailed 3-4. Another tackle point in the 7th minute by Pune leveled the match at 5-5.

Jaipur Pink Panthers scored a couple of raid and tackle points to open up a four-point gap to lead 9-5 after 10 minutes. An all out in the 12th minute gave Jaipur 13-7 lead as they were looking the better and fitter side on the mat. Deepak Hooda got in a couple of successful raids as at the end of the first half Jaipur Pink Panthers led 17-10. 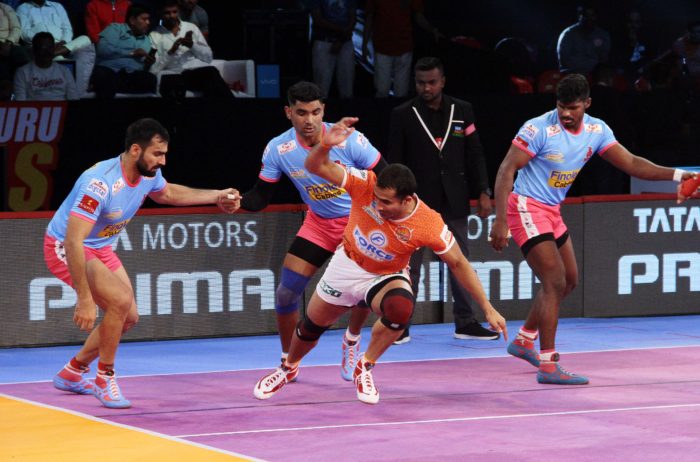 Puneri Paltan made a strong start to the second half as they forced a super tackle in the 22nd minute to trail 13-18. Puneri Paltan inflicted an all out in the 25th minute as they came right back into the match to trail 18-19. Deepak Hooda scored with a two-point raid to give Jaipur Pink Panthers 22-18 lead.

Puneri Paltan’s defence tightened the noose on Jaipur Pink Panthers raiders as they mounted a sensational comeback. In the 31st minute Pune first cut the lead to just one point and Deepak Dahiya leveled the match at 25-25 in the 32nd minute.

It was a tense affair in the last five minutes as both teams stood a chance of winning the match. With less than three minutes to go it was all square at 28-28. Deepak Niwas Hooda made a successful raid in the 40th minute to tie the match for Jaipur Pink Panthers.