Patna Pirates Beat UP Yoddha 43-41 In A Thrilling Encounter

The brave moment of the match came in the dying seconds when Pardeep Narwal chose to make an empty raid to put pressure on UP Yoddha. A gap of four days seemed to have worked wonders for Patna Pirates as they looked the more fitter and sharper of the two teams.

In an absolute nail-biter of a match, defending champions Patna Pirates edged out UP Yoddha 43-41 in Vivo Pro Kabaddi Season 6. Pardeep Narwal produced a strong raiding performance as he scored 16 points to lead Patna to victory. For UP Yoddha, Shrikant Jadhav scored 12 points but it was a case of so close yet so far. The difference between the teams was also their defensive strength. While Patna Pirates scored 11 tackle points, UP Yoddha got just seven points. 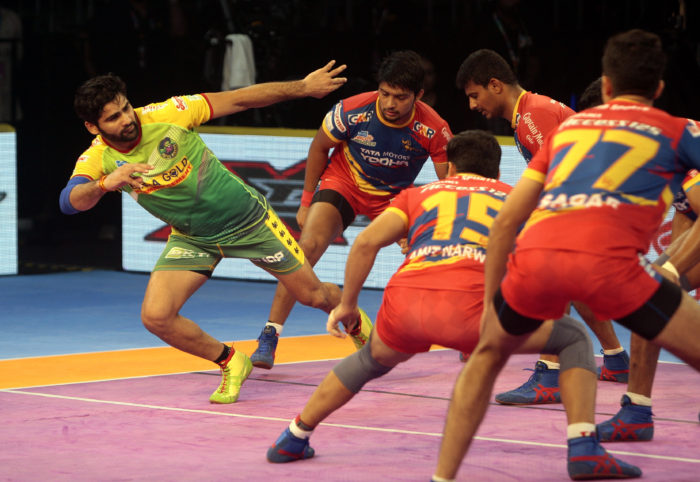 UP Yoddha got out of the blocks quicker than their opposition as they led 4-1 after two minutes. Pardeep Narwal scored his first point of the match in third minute as Patna Pirates trailed 3-5. Rishank Devadiga got a two-point raid as UP Yoddhas were looking in fine form. Pardeep Narwal then got three quick points in two raids as Patna cut the deficit to one point after 9 minutes.

In the next 10 minutes, the pendulum swung Patna Pirates’ way as they first time led in the match. But UP Yoddha came back to gain lead once again. In the 14th minute UP Yoddha inflicted the first all out of the match to lead 20-15. In the last five minutes of the first half, it was all Patna Pirates as they scored six consecutive points to lead 21-20 at the break.

Patna Pirates began the second half with a bang as they inflicted an all out to lead 24-21. The defence of Patna Pirates was marshaled well by Jawahar. Rishank Devadiga and Shrikant Jadhav handled the raiding duties for UP Yoddha as they continued to chip the Patna Pirates lead.

In the 29th minute, UP Yoddha inflicted an all out as they trailed 32-33. The last five minutes of the match were evenly contested as both teams traded raid and tackle points. Pardeep Narwal scored with a two-point raid in the 36th minute as Patna Pirates led 39-37.

Shrikant Jadhav achieved a super 10 in the 38th minute as UP Yoddha trailed 38-39. Shrikant Jadhav made another successful raid in the last minute and UP were awarded a technical point as they trailed 41-42. But Patna Pirates scored a tackle point in the dying seconds to win the match.