Patna Pirates And Tamil Thalaivas In A Thrilling 35-35 Tie

Patna Pirates and Tamil Thalaivas played out a thrilling 35-35 tie in Vivo Pro Kabaddi Season 6. Tamil Thalaivas would be the more disappointed side as they had the chance to win it twice in the dying seconds. Ajay Thakur was the star man for Thalaivas once again and scored 16 points. Pardeep Narwal got his 11th super 10 of the season and ended up with 11 points. Manjeet Chhillar scored five points for Tamil Thalaivas and was ably supported by D Pardap(4 points) in defence.

Ajay Thakur and Pardeep Narwal got their teams up and running as it was 3-3 after 4 minutes. Ajay Thakur made a two-point raid in the 6th minute to give Tamil Thalaivas 6-3 lead. Deepak Narwal scored two points in a minute as Patna Pirates leveled the match at 6-6.

Patna Pirates then went on a little run as they inflicted an all out to lead 13-8 after 13 minutes. Ajay Thakur was in great form as he picked up three more raid points to keep Tamil Thalaivas in contention. Patna Pirates led 16-14 at the end of the first half as both teams looked in contention to win the match. 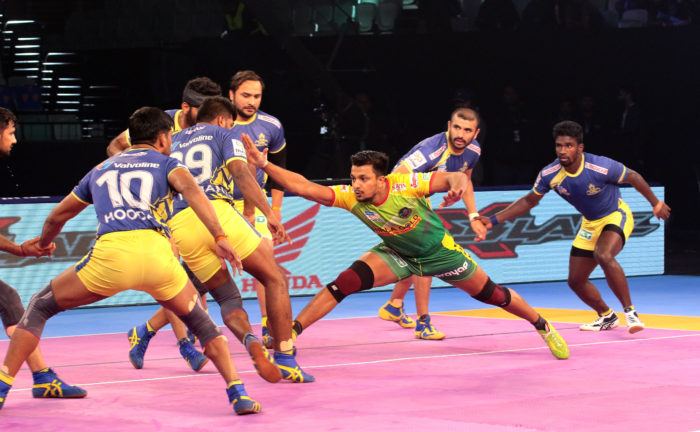 Tamil Thalaivas began the second half with a bang as Ajay Thakur’s excellent raid led to an all out. Tamil Thalaivas led 22-19 after 24 minutes as the momentum of the match shifted in their favour. Manjeet picked up a couple of raid points as Patna Pirates reduced the gap to two points.

A super tackle in the 28th minute meant that Tamil Thalaivas led 25-22. Pardeep Narwal had a quiet game by his standards as in the first 30 minutes he scored just five raid points.

Manjeet Chhillar forced another super tackle in the 32nd minute to give Tamil Thalaivas 29-24 lead. Pardeep Narwal made a successful raid in the 35th minute as Patna Pirates inflicted an all out to lead 30-29. Jasvir Singh’s two-point raid in the 37th minute brought Tamil Thalaivas back into the lead.

Pardeep Narwal made an excellent two-point raid in the 39th minute to give Patna Pirates 34-33 lead but Ajay Thakur returned the favour to give Thalaivas 35-34 lead. Pardeep Narwal scored a critical point in the dying seconds of the match which resulted in a tie.