The programme has been created with an aim to identify and support India’s future sporting talent in diverse set non-mainstream sports such as Sailing, Squash, Tennis, Swimming and Golf to name a few.

Athletes selected under the programme will be offered critical support towards the fulfilment of their sporting goals. 168 entries were received from across the country, and after a rigorous selection process led by GoSports, who are the ‘Implementation Partner’ of this initiative, 13 talented athletes have been selected to be a part of IFSG’s Stars of Tomorrow programme. Dream11 Foundation, the primary contributor to this programme, has pledged Rs.3 crores to support IFSG’s cause. 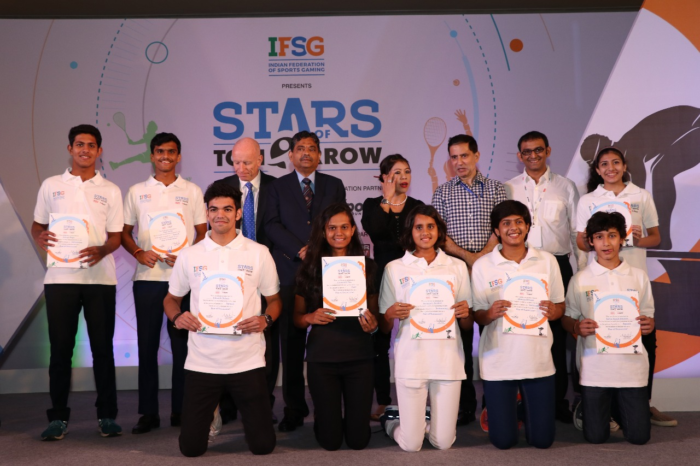 The event also witnessed industry stalwarts discuss and dialogue on ‘Is India on its way to becoming a Sporting Powerhouse?’ bringing to the fore key requirements as well as opportunities ahead to support the sporting talent in India.

Launching the Stars of Tomorrow programme, John Loffhagen, President, IFSG, said, “Inspired by the Indian Sports Ministry’s efforts and initiatives, IFSG wants to facilitate and contribute towards building India as a great sporting nation. Being a part of the sports ecosystem, we feel it is our responsibility to enable the overall growth of sports and provide specific support to deserving athletes at an individual level.”

Talking about the association with the initiative, Harsh Jain, Director – Dream11 Foundation, said, “We are proud to support IFSG’s Stars of Tomorrow initiative as it resonates with our Foundation’s objective of contributing towards building India as an even greater sporting nation. We are inspired by the Indian Sports Ministry’s initiatives like Khelo India and look forward to many more such public-private partnerships.”

Speaking at the occasion, Shri.Bhushan Gagrani, Principal Secretary- Chief Minister’s Office, Govt. of Maharashtra, said, “Public-private-partnerships will go a long way in promoting and growing the sports ecosystem in India. Any form of contribution & support from corporates, be it big or mid-sized, will help further the sports agenda of our country. The support being provided by IFSG & Dream11 Foundation will encourage these young athletes to achieve their full potential.”

Felicitating the athletes at the event, Mary Kom, 6-time World Amateur Boxing Champion, said. “I am happy to be associated with IFSG’s initiative as I feel that for India to truly become a sporting nation and be seen as a strong contender in the international arena, support needs to be given not only for team sports but also to individual sports. IFSG’s Stars of Tomorrow is another welcome step towards achieving national goals.”

Commenting on the Stars of Tomorrow programme, Prof. Ratnakar Shetty, ex-Chief Administration Officer – BCCI & Advisor – IFSG, “Due to the consistent efforts and the rigorous campaign led by the Indian Sports Ministry over the last few years, we are seeing growing awareness and interest among Indians to follow and appreciate sportspersons. Through proper preparation, resources and sponsorship, talented athletes will get an opportunity to perform to the best of their potential.”

Commenting on the GoSports Foundation’s role as the implementation partner of SOT programme, Deepthi Bopaiah, Executive Director, GoSports Foundation said: “We are glad to be the implementation partner for IFSG’s Stars of Tomorrow programme which is a long-term athlete development initiative. We have selected athletes who have exhibited great performances and potential to excel and look forward to work with them on making a smooth transition to the senior level and represent India at the world stage.”

Athletes selected to the ‘Stars of Tomorrow’ Programme include: