KUALA LUMPUR (MALAYSIA), 21st September 2018 : Vikram Singh’s 86th-minute penalty led the India U-16 Boys’ National Team to a 1-0 win over Vietnam in their first match of the Group Stage at the UM Arena in Kuala Lumpur, Malaysia today (September 21, 2018). 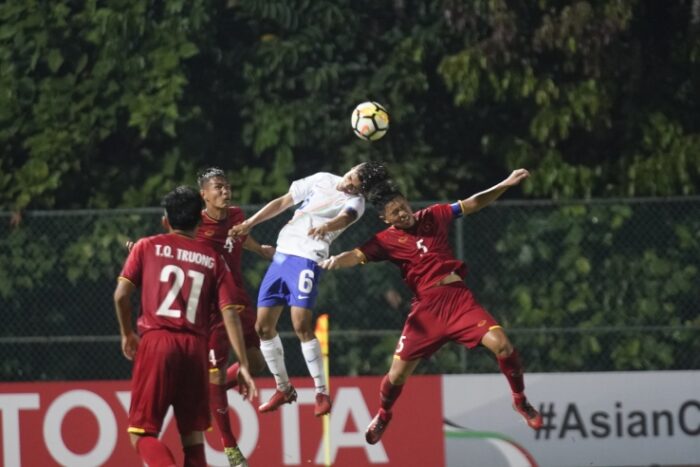 In a match where India dominated possession and had as many as four clear goals scoring chances, Vikram Singh’s late strike from the spot led the Blue Colts to a deserved win over the opponents.

Ricky Shabong, in the 17th minute, tried to open the goal scoring tally for India but his shot went wide of the goal after Vikram had pulled a ball back from the midfielder. Vietnam, however, initiated their own counter-attacks frequently, but the Indian defence paired with Niraj Kumar’s goalkeeping held them at bay.

With India dominating proceedings, Gurkirat Singh attempted a shot from distance that was saved by the opposition custodian on the 25th, and the 35th minute, India cajoled another excellent opportunity. Ravi’s cross found Vikram in the box, but from a tight angle, Vikram’s attempted shot went over the bar.

Vietnam almost fell prey to a howler in the 40th minute when an attempted pass back to the custodian was intercepted by Ravi’s incessant pressing. The Vietnamese goalkeeper timed his sliding tackle to perfection to deny Ravi’s efforts.

The half-time scoreline read 0-0 as both teams went into the tunnel on level terms.

Changing over, India’s attempt from a corner kick touched the cross-bar and went out as the Colts upped the ante, in an attempt to take the lead. Eight minutes later, Bekey Oram’s shot went over the bar.

Coach Bibiano made his first change of the match in the 61st minute and introduced Lalchhanhmia Sailo in place of Ricky Shabong and the substitute was quick to make his mark, albeit shooting wide of target, a minute later.

In the 66th minute, substitute Sailo broke free of the Vietnamese defence and found himself face to face with the opposition custodian. However, he failed to find the back of the net and forced the goalkeeper into a decent save from close range.

Vikram was brought down in the 83rd minute inside the box and India were awarded a penalty kick. The skipper found the back of the net in the 86th minute to break the deadlock and give India the crucial lead.

The full-time scoreline read 1-0 as the Indian U-16s registered their first win of the group stage. They facethe mighty Iran next on Monday, September 24, 2018.