NEW DELHI, 26th September 2018 : The state of Punjab has been a major contributor to the growth of Indian football and in the last year or so, its role has become more prominent. The first shot in the arm came thanks to the FIFA U-17 World Cup that was held in India, with a number of players in the national team having cut their teeth in academies in Chandigarh and Mohali.

Secondly, it was a Punjab-based side — Minerva Punjab FC, that won the I-League 2017-18 title earlier in March as they overcame incredible odds and pipped giants such as East Bengal and Mohun Bagan to the crown on a dramatic final match day, in what was just their second season in the top flight. 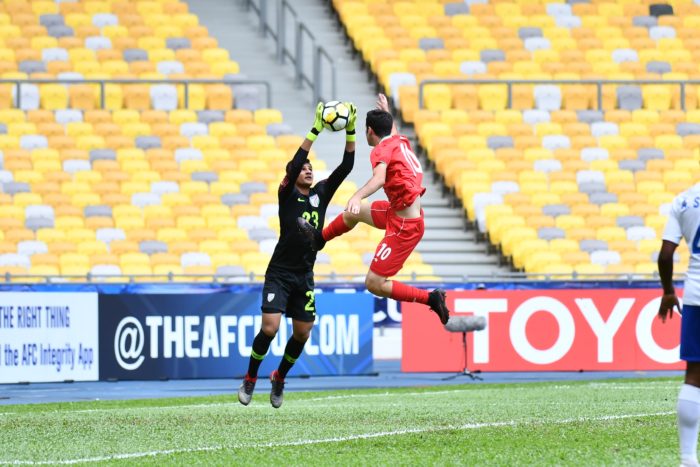 With the AFC U-16 Championships underway, it is certainly worth noting that the squad has a distinct Punjabi flavour, with the famed cry of ‘Jo Bole So Nihaal’ a feature of the side’s pre-match rituals and the likes of Diljit Dosanjh, Sidhu Moosewala and Mankirt Aulakh all popular picks on the players’ music playlists.

The hearty and jovial nature of the Punjabi lads is also an unmissable feature in the team, with the likes of defender Gurkirat Singh, who is also known as Nanni, and captain Vikram Partap Singh being among the bonafide pranksters. The rap sheet makes for interesting viewing as well and includes ringing the fire alarm at an airport in Qatar and scaring the team manager in the hotel laundry room.

Down to business, the lion-heartedness of these players comes to the fore on the pitch too, with the Punjab boys playing a crucial role in the team’s title triumph at the SAFF U-15 Championships in Nepal last year and their successful qualification run for the AFC U-16 Championships.

Vikram, who plays as a forward, was awarded the player of the tournament at the SAFF Championships, scoring the deciding goal in the final – his fifth overall at the tournament. He is also the Indian team’s only scorer at the AFC U-16 Championships so far, finding the back of the net in the 1-0 win against Vietnam.

Gurkirat, the team’s first-choice left-back, has played every minute in the championship so far and has played a crucial role in the team’s two clean sheets in their opening two games.

Also hailing from Punjab is goalkeeper Niraj Kumar, who was the hero for the Colts in their second match against Iran, saving a penalty to help the team secure a point and keep their ‘goals against’ column intact.

There is also Harpreet Singh aka Badshah, who is a striker and found the net twice against Nepal in the AFC Championships qualifiers, scoring in the 83rd and 85th minutes to help the team to a critical draw and came on a substitute at the AFC U-16 Championships as well.

Also making his presence felt was defender Harpreet Singh, who is referred to as Happy, and was brought on as a replacement in the goalless draw against Iran in the 67th minute.

The Indian team currently has four points in two games and a draw or win against Indonesia on Thursday can see them ensure their place in the last eight. History could be made in Malaysia in the coming days and one can be certain that the boys from Punjab will have a major role in proceedings.