Jaipur Pink Panthers came up with an accomplished performance to beat Tamil Thalaivas 37-24 in the Inter Zone Challenge Week of Vivo Pro Kabaddi Season 6. Deepak Hooda (9 points) was the architect of their victory and was ably supported by Anand Patil (5 points) and Ajinkya Pawar (4 points). Sunil Siddhgavali got a high five in defence for Jaipur Pink Panthers. Tamil Thalaivas started off brightly but faded away as their two key men Ajay Thakur and Manjeet Chhillar had a disappointing game. The victory keeps Jaipur Pink Panthers in the hunt for a place in the playoffs.

A couple of successful raids by both teams in the first two minutes made the score 2-2. It was an evenly contested affair for the first 11 minutes of the match as the defence of Jaipur stood strong against the raiders of Thalaivas with the score level at 7-7.

Jaipur Pink Panthers turned on the pressure with Anand Patil making a two-point raid in the 14th minute. Deepak Hooda’s successful raid in the 16th minute led to Thalaivas suffering an all out as they trailed 9-16. Sukesh Hegde scored a raid point in the 20th minute as Tamil Thalaivas went into the break trailing 10-17. 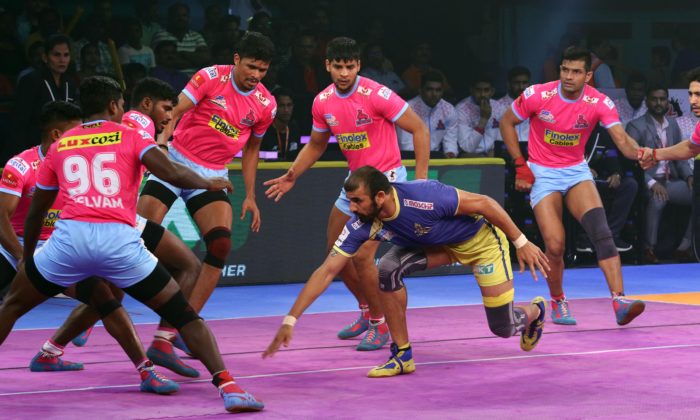 Tamil Thalaivas were struggling to keep up with Pink Panthers as their two key players – Ajay Thakur and Manjeet Chhillar – couldn’t get going. Chhillar couldn’t score a single tackle point in almost 30 minutes whereas Thakur had just two points against his name.

For the Jaipur Pink Panthers, it was Deepak Hooda who continued his rich vein of form. He came into the match as Jaipur’s leading raider and was once again a force to reckon with.

Jaipur Pink Panthers held a seven-point advantage as they led 23-16 after 30 minutes of play. Things took a turn for the worse for Thalaivas as they suffered an all out in the 34th minute to trail 18-30.

In the last five minutes of the match Jaipur Pink Panthers continued to assert their supremacy over Tamil Thalaivas and ran out comfortable winners in the end.