NEW DELHI, 19th SEPTEMBER, 2018 : Indian U16 dished out another stellar performance in the ongoing AFC U-16 Women’s Championship Qualifier to churn out a spectacular 4-0 win against Pakistan at the MFF Stadium in Ulan Bator today (September 19, 2018). 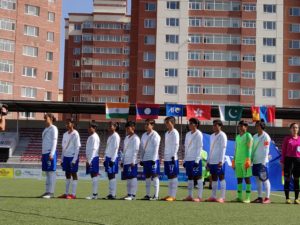 While Avika Singh (22′) opened the scoring for India, the Pakistani goalie Ayesha (43′) conceeded an own goal at the stroke of the first-half. Sunita Munda (82’) added one to get her on the scoresheet whereas skipper Shilky Devi (88’) wrapped it in style.

Following the win, India are firmly seated at the top of the Group B having collected 6 points from 2 matches.

Sunita, Shilky and Avika combined well to wreak havoc on the arch-rivals but the rival defenders soaked in the pressure until the 22nd minute when Avika notched the opening goal for India.

Sunita breezed past the left-back to deliver a low cross for Avika whose well-timed tap-in earned India the lead.

Pakistan were happy to sit back in their own half and defend. Goalkeeper Ayesha made some exquisite saves during the course of the game but a miscued effort from her in the 41st minute landed inside the goal to hand India a 2-0 lead.

After the changeover, India continued to mount more pressure on Pakistan.

The third goal came in the 82nd minute when Sunita, the architect of Avika’s goal, got her name on the score sheet.

Six minutes later, skipper Shilky latched on another attack from the middle and kept her calm to score the fourth goal of the game which eventually, nailed the final one in the coffin.

India are scheduled to take on hosts Mongolia in the next match two days later (September 21, 2018).