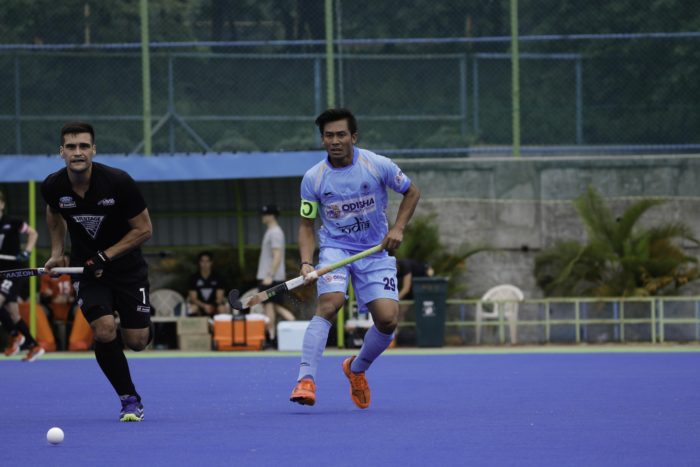 The 26-year-old hails from Manipur and is known for his composure and authority in India’s midfield. After making his debut for the National team in 2011, the Midfielder won his first medal with the Senior team at the 2013 Men’s Asia Cup where the Indian team won the Silver Medal.  He was also a member of the team which won the Silver Medal at the 2014 Commonwealth Games held in Glasgow. His first Gold Medal with the Indian team came in the same year when the team beat Pakistan 4-2 in Penalty Shootout after the scores were tied at 1-1 after the regulation time. His intercepting and ability to transform defence into attacks within seconds during turnovers is one of the key aspects of his game. The 26-year-old has also been the Vice-Captain of the team in recent years, and his exploits in Midfield have led India to the Gold Medal at the Hero Asia Cup 2017 and the Bronze Medal at the Odisha Men’s Hockey World League Final Bhubaneswar 2017.
The man from Manipur also represented the country at the Gold Coast 2018 Commonwealth Games earlier this year, and was a part of the team that won the Silver Medal at the FIH Men’s Champions Trophy 2018. Chinglensana was also a part of the team that won the Bronze Medal at the 18th Asian Games 2018 and the Gold Medal at the 5th Men’s Asian Champions Trophy 2018.

“Making my 200th International appearance for the Indian team gives me immense joy and satisfaction as it is something that I have always looked forward to. Representing the country for a prolonged period of time and helping in winning laurels throughout the world against the best teams is something that motivates me and I am proud to have achieved this milestone on the biggest stage i.e the Odisha Hockey Men’s World Cup Bhubaneswar 2018. I would like to thank my family, my teammates, support staff and Hockey India, for always supporting me throughout my career and I look forward to achieving many glorious things for the nation,” said Chinglensana Singh Kangujam.

Congratulating the 26-year-old Vice-Captain, Mr Rajinder Singh, Secretary General, Hockey India said, “On behalf of Hockey India, I congratulate Chinglensana Singh Kangujam for completing 200 International Caps for India. It is an important milestone in his career and shows the dedication of the player towards the national team. He made his Senior team debut in 2011 and has completed 200 appearances in close to seven years, which is a measure of the consistency he has shown. The experience and graft he shows in the midfield is something that is crucial to the Indian team. I would like to wish him the best for the future and hope he achieves more success in the coming years.”
Tags: Chinglensana Singh KangujamfihhiHockey IndiaHockey World CupIndian Hockeyindian hockey team
0Likes
Leave a comment