Gujarat Fortunegiants extend their win streak to 6 matches in Vivo Pro Kabaddi League Season VI with a win over host U Mumba. Siddharth Desai became the fastest player to reach 100 raid points in a season. Parvesh Bhainswal and Sunil Kumar continued to destroy U Mumba’s raids while Vinod Kumar came in a surprise package for U Mumba as he got 4 tackle points including a Super Tackle on Sachin in the 7th minute. Gujarat Fortunegiants won the match because of a miraculous effort by Mahendra Rajput which saw him get rid of 5 players and inflict an All Out on U Mumba in the 37th minute to shift the momentum towards his team.

Both teams are on a roll as Gujarat has won 5 matches on the trot while U Mumba are on a 4 match win streak. A streak is set to be broken today. Saching got a bonus point in the first raid to start the match while Rohit Rana dashed Rohit Gulia out of the mat with brute force to make it 1-2 with Gujarat still leading. A strong chain hold on Abhishek Singh by Sunil Kumar and Sachin saw them take the lead again by 3-4 in the 4th minute.

Sachin got Dharmaraj Cheralathan with a side kick and was awarded a free point in the form of Surender Singh as he tried to dash him out very close to the midline which made the score 4-7 in the 6th minute. Siddharth Desai got his 100th raid point in the 7th minute to achieve this feat in the least number of matches till now. A strong ankle hold by Vinod Kumar helped U Mumba get a Super Tackle on Sachin and equalize the score to 707 in the 7th minute. It looked like they would inflict the All Out but were shocked to concede one in the 16th minute as Dong Geon Lee got Dharamraj and Rohit Rana out in the 16th minute to make it 12-15. The half ended with Gujarat leading against U Mumba by 4 points with the score reading 14-18. 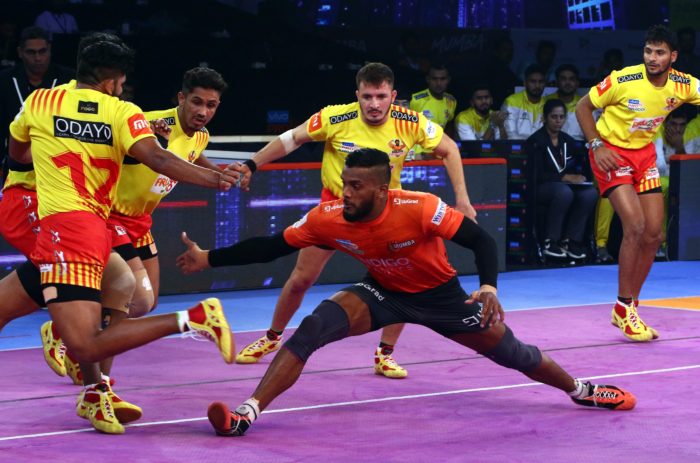 U Mumba pounced back strong in the second half which was imminent from Siddharth Desai getting Rohit Gulia and Sachin ushered to the bench in the 21st minute to reduce their lead to 16-18. Desai popped another role for his team as he caught Sachin with a strong ankle hold out of nowhere to make the scoreline 18-19 in the 22nd minute. They gave away a free Super Tackle to Gujarat as Rohit Baliyan entered the lobby without a touch in the 24th minute to give them back the lead to 18-21.

U Mumba inflicted an All Out on Gujarat in the 27th minute when Sunil Kumar was caught by Vinod Kumar to take the lead by 24-21. The 29th minute saw Siddharth Desai nurse his shoulder injury as it popped out of place in his attempt to get a hand touch on Ruturaj Koravi while the 31st minute saw Sachin limp out of the mat when he was caught by Vinod Kumar to get the score to 27-23. K. Prapanjan entering the lobby without a touch made Gujarat’s life miserable as they were 4 points down in the 36th minute. The tables were completely flipped on the spot when Mahendra Rajput crossed the midline in the 37th minute as he was touched by Fazel Atrachali, Rohit Rana, Siddharth Desai, Vinod Kumar and after a successful review Darshan Kadian to inflict an All Out out of nowhere and lead by 30-33. U Mumba nearly drew the match as U Mumba got 2 points in the last 15 seconds of the match when Fazel got a short block on Mahendra Rajput and Siddharth Desai slipped out of Parvesh Bhainswal’s grip to make it 36-37. In the last raid Ajay Kumar got Rohit Baliyan as U Mumba tried to keep a high line and ensured that Gujarat Fortunegiants won against U Mumba by 36-38.