Gujarat Fortunegiants continued their win streak with their 4th win on the trot in Vivo Pro Kabaddi League Season VI. Jaipur looked like they could have a different story but succumbed to Gujarat’s defense. Sunil Kumar did the damage for Gujarat in prominence as he got 8 tackle points from 8 tackle attempts and a Super Tackle. The South Korean Young Chang Ko made his mark in the eyes of Jaipur team management as he was the star player for Jaipur with 2 Super Tackles and a tackle point to have 5 tackle points. Anup Kumar and Deepak Niwas Hooda had a dismal performance with many unsuccessful raids.

Jaipur Pink Panthers were having a bad patch after losing their last three matches and wanted to regain their glory while Gujarat Fortunegiants were from the opposite side of the spectrum as they were entering the match from a three match win streak. It looked like the bad patch would continue as Jaipur were 4 points down by the 3rd minute at 0-4 after some great efforts by Gujarat. Jaipur came back slightly when Mohit Chhillar made a successful Super Tackle effort on Rohit Gulia with an ankle hold to make it 2-4. 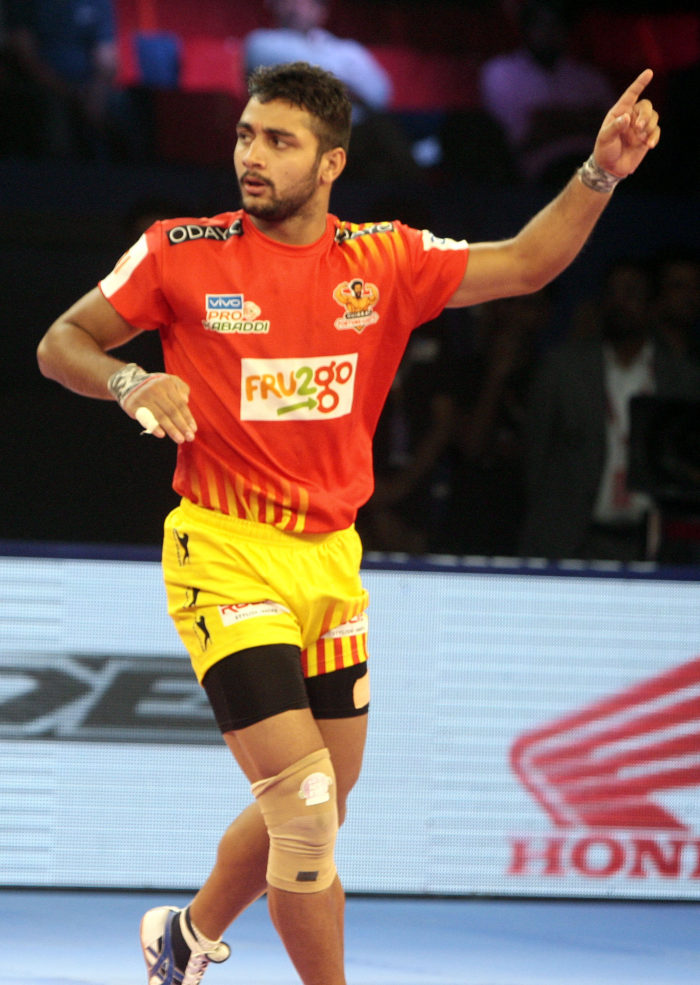 The balance then shifted with Gujarat looking like they were in a bleak spot as they were down to 3 men in the 7th minute only to glimmer with a Super Tackle by Ruturaj Koravi to dash out the experienced Anup Kumar and regain the lead with 5-6. Raiders of both teams made a few errors by entering the lobby without a touch and kept the score ticking. A sudden change in fortune was seen in the 16th and 18th minute which saw Young Chang Ko bring back Jaipur with two Super Tackles and get Sachin and Mahendra Rajput out with a double thigh hold and a double ankle hold respectively. The half ended with Jaipur trailing by 1 point with score line being 13-14.

Gujarat finally got the opportunity to inflict the All Out on Jaipur in the 23rd minute after they continuously came out of it. After having a 6 point trail above them in the 25th minute, Jaipur constantly recovered points from Gujarat and came within 2 points to them with a great block effort by Young Chang Ko to make it 18-20. 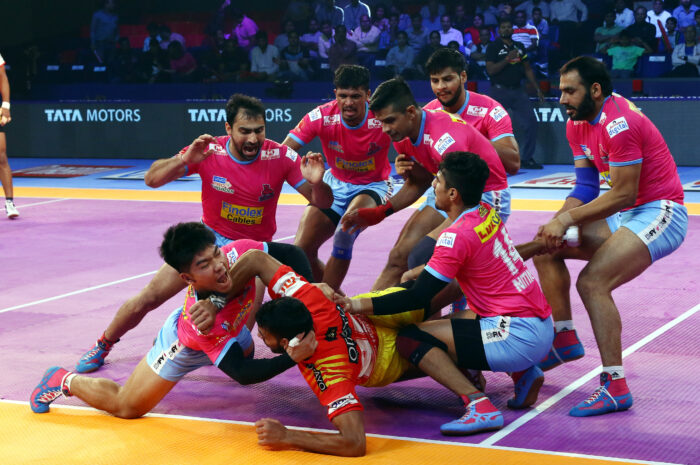 With 2 men on the mat, Anup Kumar entered the half with a sly smile on Shubham Palkar in his 29th minute raid only to be stopped in his tracks by a strong ankle hold by Sunil Kumar and assistance by Shubham to get the Super Tackle and make it 18-22. Anup Kumar and Mohit Chhillar’s absence saw Jaipur having a weak performance on the mat and hence conceded another All Out. Gujarat inflicted it in the 35th minute with Parvesh Bainswal making a strong ankle hold on Deepak Hooda. The 39th minute saw Gujarat Fortunegiants completely show their intent when Parvesh Bainswal with assistance from Sunil Kumar pull Anand Patil back from the midline and make it 25-36. The match ended with Gujarat Fortunegiants winning the match against Jaipur Pink Panthers by 25-36.