Andrija Kaludjerovic of Delhi Dynamos FC during the warmup session before the start of match 23 of the Hero Indian Super League 2018 ( ISL ) between Delhi Dynamos FC and Northeast United FC held at Jawaharlal Nehru Stadium, New Delhi, India on the 30th October 2018 Photo by: Deepak Malik /SPORTZPICS for ISL

0
SHARES
31
VIEWS
Share on FacebookShare on Twitter
Goa, November 6: FC Goa coach Sergio Lobera will demand a response from his side when they take on Delhi Dynamos in a Hero Indian Super League clash at the Jawaharlal Nehru Stadium, Goa, on Thursday.
This was after the Goan outfit suffered a 4-1 defeat in Jamshedpur which ended their unbeaten start to the season. Lobera himself admitted that the performance was the ‘worst’ he has seen in his tenure as they came up second best in every department.
“This is possibly the worst defeat of Goa under my coaching.  We have to work hard and Improve,” the Spaniard said.
However, the Spanish coach will take heart from the fact that they are playing in front of their fans given the 100 per cent record they enjoy this season on home soil.
The good news for Goa is also the return of star striker Ferran Corominas after after serving his one-match suspension. His presence will certainly bolster their attack given the lethal form he is in with six goals and four assists in 350 minutes. 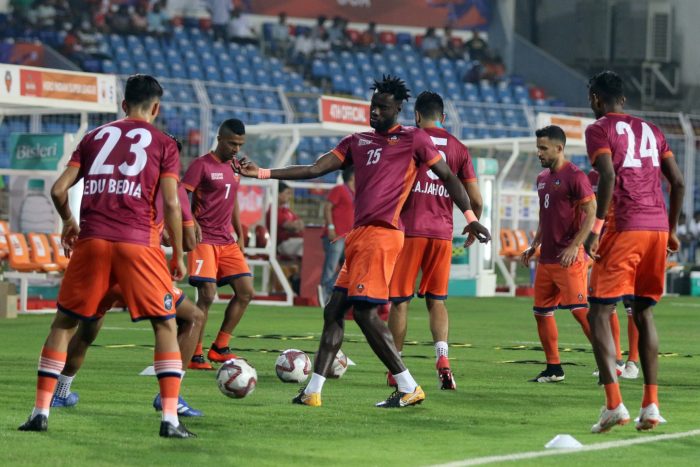 “It is evident that Corominas is a very important player for us and its good news that he will be back for us. But if you rely so much on one individual then it’s unlikely that you will win a lot of things. We need to overcome adversities with or without the players,” said Lobera.
It will be interesting to see if Lobera decides to change personnel in key positions especially with Brandon Fernandes getting back to full fitness.
The game against Delhi Dynamos will also see Goa’s very own Romeo Fernandes return to Fatorda. The winger, who enjoyed a purple patch under Zico, joined Delhi last season and since then, has had a patchy form. It remains to be seen if Fernandes would start as although he has travelled with the team, he has only just recovered from a finger injury.
Coach Josep Gombau will be pleased with his team’s performance for a period of 15 minutes in the second half against Jamshedpur FC where they managed to score twice. He took the gamble of fielding Albino Gomes in between the sticks at half-time and preferred to play more foreign players in the outfield.
Whether or not Gombau chooses to take the game to Goa from the outset remains to be seen. Mumbai City FC had adopted a similar approach but their woeful finishing coupled with the gaps left behind in defence allowed Goa to ship five past them.
“It’s true that Goa are very good at attacking football. If they catch us open, they can play between the lines and punish us. It will be a good game as both the teams like to play good football,” said Gombau.
In seven matches this season, Delhi haven’t been at their absolute best. Gombau will hope that they are eighth time lucky. After dropping down to the fourth spot in the league table, a win on Thursday will take Goa back to pole position.
ShareTweetShare